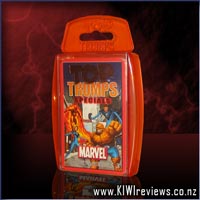 Disclosure StatementFULL DISCLOSURE: A number of units of this product have, at some time, been supplied to KIWIreviews by Top Trumps (NZ) or their agents for the purposes of unbiased, independent reviews. No fee was accepted by KIWIreviews or the reviewers themselves - these are genuine, unpaid consumer reviews.
Available:
At Quality Stationary and Games Outlets

Never have so many super heroes been brought together to battle their evil foes and compete with each other to decide who is the most intelligent, the strongest, the speediest, the tallest, the most agile and, possessor of the greatest fighting skills.

In the third installment of our brilliant Marvel Series you'll come face to face with comic legends such as the 'Fantastic Four', 'Bullseye' and 'Red Skull' Compare facts such as height, intelligance, strength, speed, agility and fighting skill.

If you're a collector, you can even combine the pack with our D C Super Heroes 1 title for the ultimate in comic showdowns! 2 or more players can play. Players deal the cards amongst themselves and one player will read out a fact from their top card - the other players must openly compare the same fact. Whoever has the highest fact, wins the opponents cards. The winner will be the person who has all the cards at the end.

I have been a fan of Marvel Comics characters since I was a young lad and have often thought how good an idea it'd be to have a game based on them.

This game is great for fans and those new to the characters, as there are fun 'factoids' included on each of the cards for those people who know the personal history of the superheroes and those who don't. I played a game with my (slightly) younger brother and we both had a ball. Our game was slightly drawn out as we kept getting distracted by the little character histories and forgetting whose turn was next.

He enjoyed it so much that he took it around to a friend of his, who got hooked as well, and they spent many hours developing fun and interesting new ways to play it.

Overall, excellent in design and quick to learn. This game is currently getting played at least once a week. I look forward to more decks along the same lines and other titles to come out in the future.

Mervel comics have been around since, well, forever! Who could forget the Fantastic Four or Ironfist, if you enjoyed the classics, or Dark Phoenix or Onslaught if you are more into the ultra-modern X-Men incarnations. These characters are famous to those who know and love them, and many are famous even to those who aren't comic buffs suffering from chronic escapism.

Drawing characters from such a broad timescape gives rise to some fun combos, and the infobytes at the bottom of each, clearly readable, card just add that extra depth that makes the game drag out while everyone has a good read-up before calling out the stats.

My young son was particularly impressed with the artwork, despite not knowing ANY of the characters portrayed. I found that really funny at his exuberant exclaimations about this guys costume, or a familiar phrase in the blurb, such as 'spiderman' or 'x-men'.

Overall, another great deck, with such a clean layout it's a pleasure to play with.

A very cool deck even though I dont read much of the Marvel range of comics. I loved the artwork. The award for Best Artwork would have to go to Dark Phoenix, for just being downright tasty. The Best Character Award goes to Onslaught for just being the biggest, nastiest, coolest meanie in the whole deck. And lastly I award the Most Authentic Character Award to Loki, for being the only one I can point to and say "This one is at least based on a mythos I know about". Not my favourite deck, but certainly a highly cool one. Comic buffs, get out there and buy it.

I guess you have to be American to understand the comic book heroes. It seems that all American kids and adults dream of these mythical super-human creatures ready to defend the world and the 'American way'. However, these cards depict a different superhero with whom I have never been aquainted.

These cards are rich in detail and illustration, and accompanied by a short biography of the character depicted. On reading them, it became clear to me that not all of these 'superheroes' were superheroes. Some of them were the villains trying to acheive the American dream of world domination.

These cards appealed to my daughter on some level, though neither she, nor I, am able to articulate the appeal behind each pack. I guess if she was reading the Marvel comic books on a regular basis, she, and I, would have a greater understanding and appreciation for the cards.

I suspect these are very much 'boy' cards, and the appeal to young lads will be immense. I can almost hear the boastful taunts of 'mine is better than yours' and almost see the fisticuffs as they try to enforce their opinion on their peers. All in all, a great pack, great illustrations and details, will have great appeal to many, but sadly not for me.

Learning about New Zealand and its wonderful natural landmarks, fauna and marine-life will be easy and fun for children with this colourful floor puzzle. 48 pieces. Size 54 x 87 cm