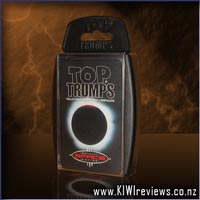 Disclosure StatementFULL DISCLOSURE: A number of units of this product have, at some time, been supplied to KIWIreviews by Top Trumps (NZ) for the purposes of unbiased, independent reviews. No fee was accepted by KIWIreviews or the reviewers themselves - these are genuine, unpaid consumer reviews.
Available:
At Quality Stationary and Games Outlets.

Galaxies, nebulae, meteorites, comets and supernovae, satellites and, of course, planets, battle it out in the ultimate Top Trumps contest. The elements of Outer Space are rated on Temperature, Year of Discovery, Mass, Speed, Diameter & Distance from the Sun.

2 or more players can play. Players deal the cards amongst themselves and one player will read out a fact from their top card - the other players must openly compare the same fact. Whoever has the highest fact, wins the opponents cards. The winner will be the person who has all the cards at the end. In addition to the stunning imagery and astounding facts, the reverse of the playing cards form a jigsaw of planets Jupiter & Mars - out of this world!!

As an adult I have to say, my attention span for this game lasted about 10 minutes. Lucky this game isn't aimed at me - my ten year old son on the other hand... lets just say I will be playing that game for quite some time.
He loved it! He thought the facts were interesting - he loved the way you could put the puzzle on the backs of the cards together, and the pictures were fabulously done. Unlike a lot of games these days it was nice and simple to play, whilst imparting knowledge. Would be an incredibly handy educational toy for schoolteachers!

'Space the final froniter....', so yes ok I like Star Trek (The earlier series more so than the later ones), and through that I developed a fasination with space, and this is definately one way to fule my fasination with the mysteries of the cosmos, from earths humble moon all the way through to a Quasar, this deck has it all and will give you any fun games and teach you a thing or two at the same time.

It was a lot of fun playing this one, we spent about two thirds of our time reading instead of playing.

Some of the names are hard to read because of the fonts used, but really, the stats were the big thing and the infobites made it really interesting. So what that it slowed the pace of play? Who gets into a game with their kids and expects to fit a schedule?! Just all the other decks available this is a really fun game, and the puzzles on the backs of the cards were just icing on the cake. Lots of fun and educational too, especially with the current reignited interest in orbital and spacecraft.

I think it is really fun. The pictures on the back of the cards are a puzzle and it is hard but fun. There are three puzzles on the back.

The front of the cards are illustrated well and have lots of interesting facts about the picture on the card. The pictures are excellent photographs and I think it is good for the budding scientists.

I think it would be interesting to take to school because we have been studying space and I think the other children in my class would be very interested too.

It is really fun and I love this game.

I'm a total space nut, have been since I saw a movie of an early Apollo mission launch. So it was with great interest I had a peek at this card deck.

Packed with interesting facts and tidbits on every card, I found myself having just as much fun reading the snippets of trivia as actually playing the game. My son has a growing fascination with space and such, and he was enthralled by the pictures, and was full of curiousity, meaning a couple of hours of good quality time as I tried my best to explain such things as black holes, why some planets have rings and others don't, and what causes the Aurora Borealis... and I tell you, I had to do some fancy analogy-invention to explain some of the bigger concepts in kidspeak.

We also had a lot of fun flipping the cards over and assembling the 3 minipuzzles printed on the backs... they are in no way difficult, but they are fun, and the kids can enjoy the sense of satisfaction at having done something that requires a bit of thought, and generates some praise from peers and elders. And let's face it, what kid doesn't enjoy basking in a bit of praise?!

Overall, another wonderful, entertaining deck from Top Trumps. The way SETI and NASA are going, we could see another deck out any time...

There can be few people who are not genuinely interested in what is 'out there' and these cards, irrespective of the game, illustrate and educate anyone who plays this game.

The photos are stunningly detailed - the sort of photos I have by choice on my desktop, downloaded from either the NASA or Hubble websites. The photography is accompanied by facts which are part of the game and by extra educational facts which are not. Anything that can integrate facts, education and knowledge into a game format has to be a winner for me.

My young daughter (Mad Reader) was drawn to the cards, and each card she drew from the pack was greeted with gasps of 'wow - Daddy, look at this' and she then proceeded to read some of the facts off the cards. This is one hell of an educational game because even the most educationally resistant kid cannot fail to learn from this. The parents, like myself, cannot fail to be impressed by a child actually wanting to learn and actually asking questions about the cards.

My daughter spent so long looking at the cards that she almost forgot to play the game.

Planets, comets, galaxies and supernovae are mixed with metorites, craters, aurorae and moons to create an exciting and educational game. I was even surprised to see Sedna, thought and disputed to be the tenth planet in the solar system, included, though one can hardly be surprised to see Quoar not included.

From my perspective, and from seeing my daughter's face fill with pleasure from this pack, I would have to give Top Trumps : Space a big thumbs up. Recommended to everyone - from this planet or not....