Dragonheart: Battle for the Heartfire review 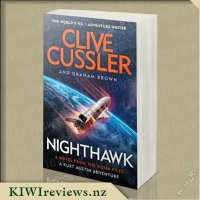 Disclosure StatementFULL DISCLOSURE: A number of units of this product have, at some time, been supplied to KIWIreviews by Penguin Random House or their agents for the purposes of unbiased, independent reviews. No fee was accepted by KIWIreviews or the reviewers themselves - these are genuine, unpaid consumer reviews.
Available:
June 2017

When the most advanced aircraft ever designed vanishes over the South Pacific, NUMA operatives Kurt Austin and Joe Zavala are drawn into a deadly contest to locate the fallen machine. Russia and China covet the radical technology, but the United States worries about a darker problem. They know what others don't-that the X-37 is carrying a dangerous secret, a payload of exotic matter, extracted from the upper reaches of the atmosphere and stored at a temperature near absolute zero.

As long as it remains frozen, the cargo is inert, but if it thaws, it will unleash a catastrophe of nearly unthinkable proportions. From the Galapagos Islands to the jungles of South America to an icy mountain lake many believe to be the birthplace of the Inca, the entire NUMA team will risk everything in an effort to avert disaster... but they may be caught in a race that no one can win.

What scares me the most about this book, what makes it a thriller more than a fiction title in my mind, is just how insanely plausible it could be. If the premise of the 'exotic matter' is taken as 'likely' then everything else strikes me as exactly the sort of stupid antics humans, especially those in the military, are quite comfortable with and capable of.

In this story, we are presented with a super-secret hybrid crafts - something akin to the now-defunct Space Shuttle only more compact and mostly autonomous - that has all the tech available at the time of its inception to make it pretty much invisible... and yet somehow, it goes haywire, loses contact with command, and vanishes. How could this happen? Was it a malfunction, sabotage, a mid-air collision... what could it possibly be?

Alas, the answer is strongly hinted at on the last page of the Cast of Characters, before even the prologue kicks in. As an avid, experienced reader, I was greatly disappointed by this slip-up that pretty much gave away a key plot element... however I will admit that the eventual revelation of that person's true identity was a surprise, and was presented fairly well... so maybe it was an intentional "faux pas" and not a just a sloppy oversight. I'll give the benefit of the doubt, and say "well played!"

The plot itself flows well, smoothly and coherently with a solid, self-consistent setting. As with all previous titles co-authored by Cussler, I found the action scenes to be very fast paced, yet not cluttered with extra detail that didn't serve to drive the suspense. Everything you want, and need, to keep you engaged and nothing there that actually clouds the plot development, though in a few places you could be forgiven for thinking "Why on earth is THAT being mentioned? It has NOTHING to do with this!" only to find a chapter or two along that it was a vital hint or key to something that grabs the plot and spins it around, flips it over, and kicks it off in a new direction.

I love how Cussler and co. have collaborated on a whole world, and the characters from many titles and series' all interact with each other, crossing the boundaries of each series to form a network that ties in all the disparate stories. Despite this being a Kurt Austin title, you get some of Dirk Pitt's cohorts chiming in as well, and I half expected the crew of the Oregon to be called in to assist too. Alas, they stay quietly in the wings, busy on their own adventures.

Overall, this was a great tale, an excellent read, and one that will be pulled down off the bookcase again in future when I feel the need for a bit of vicarious adventure. My only complaint about this title was that the ending felt a little abrupt, cut short and truncated for some reason... still, considering what was going on, drawing it out too much would have felt ridiculous. It's a bit like drinking a glass of cola on ice - you think there's more there than there is, so when suddenly that last sip finishes well short of expectation, you feel a little short-changed. A small thing, and one that only serves to leave me keen for more in the next book!

The search seems to be taking them to Vienna, and they hold a coded piece of Mozart's sheet music that's key to finding the next clue. But tailed by a pack of power-hungry relatives, Amy and Dan can't see if they are sailing toward victory... or straight into a ... more...