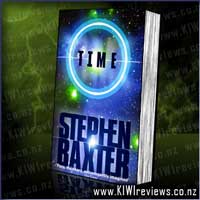 Disclosure StatementFULL DISCLOSURE: A number of units of this product have, at some time, been supplied to KIWIreviews by HarperCollins or their agents for the purposes of unbiased, independent reviews. No fee was accepted by KIWIreviews or the reviewers themselves - these are genuine, unpaid consumer reviews.
Available:
November 2000

The end of the World News: The Human Race extinct in 200 years!

This is the Carter Prophecy and it is irrefutable, expressed in the universal language of numbers. But what if there is still a way to survive the catastrophe? When a coded message from the future turns up amid the cosmic background noise of the Big bang, Reid Malenfant, NASA drop-out turned entrepreneur, diverts his entire space enterprise to find out what it means.

The message gives the coordinates of the asteroid Cruithne, Earth's remote second moon - nobody knows how it got there. Soon, Malenfant, his ex-wife Emma, a super-intelligent child and a disturbed mathematical genius are on their way to Cruithne. What is discovered there is nothing less than a revelation: The secret reason for our existence, visible at last beneath the rippled surface of Time's river.

Can this knowledge save the human race, or even the universe itself?

I must admit, though I really enjoyed this book, it wasn't my favourite of Steven's works. The story is split into 3 main chains, which can be somewhat jarring switching around at times.

Based on current scientific theories, this book holds together quite well, with very few internal inconsistencies... and the few there are could easily be put down to an incomplete understanding of the quantum realm, rather than any lack in the story-telling itself.

I found some of the concepts highly intriguing, especially the storyline following Sheena 5 and her decendants. Makes me glad I don't eat seafood.

I'll leave you to find out what that means.

Overall, not the best he's put out, but still a thoroughly enjoyable read.

The most terrifying events in history are brought vividly to life in this new fictional series! In book 1, ten-year-old George is trapped on the Titanic -- how will he survive?

Ten-year-old George Calder can't believe his luck -- he and his little sister, Phoebe, are on the famous Titanic, crossing the ocean with their Aunt Daisy. The ship is full of exciting places to explore, but when George ventures into the first class ... more...