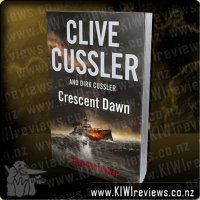 Disclosure StatementFULL DISCLOSURE: A number of units of this product have, at some time, been supplied to KIWIreviews by Penguin Random House or their agents for the purposes of unbiased, independent reviews. No fee was accepted by KIWIreviews or the reviewers themselves - these are genuine, unpaid consumer reviews.
Available:
August 2011

Dirk Pitt is surveying in the Middle East when a stroke of luck reveals an Ottoman wreck with a very curious cargo. While investigating the find, he foils a night raid on Istanbul's Topkapi Palace Museum. This puts Pitt at the center of a race to acquire a series of legendary artefacts.

Meanwhile, the region is being pushed to the brink of war by a series of explosions across Turkey and Egypt. Finding that his search for the artefacts is linked to the attacks, Pitt must prevent a deranged brother and sister's fanatical plans from succeeding.

Klutz Dress Up Your Own Paper Pups
Rating: 9.9

As with all other Cussler titles I have read, this one is packed with action, twisted plots, more-twisted villains, and some of the most amazing locations and landmarks our world has to offer. Even if the story itself doesn't grab you, reading Cussler's tales is an education into the history, and sometimes possible near-future, of our world.

In this tale we are also given an all-too-plausible thumbnail sketch of the political realities in play in the Middle East. It actually worries me somewhat to think that variations on such plots as described herein could in fact be in play and we would be none the wiser until it was too late.

as usual, the characters are very well defined, but only as far as they need to be. We aren't left with any empty spots in the tapestry of depth needed to explain their actions, but nore are we burdened with more than is necessary for them to play their parts and move on, either into later parts of the plot or out of the story altogether. This leaves plenty of room for more plot and action - a staple feature in all Cussler titles I have had the pleasure of reading thus far.

If I had one gripe with this particular story, it was the overwhelming sense of hatred between Muslim and Western worlds, which is not as evident when you actually talk to many Muslims. Having had the pleasure of knowing quite a few, and being taught some of the key Muslim phrases so that I may talk with them without causing offence, it is clear that the majority are more than happy to find a way to coexist with Western culture, if they are treated with respect. This story doesn't show that very well at all, instead showing all Muslim characters as Western-haters more than willing to kill or die for the glory of Allah, may his name be praised.

Overall, the story still pops, the plot still thickens, Dirk Pitt (Senior and Junior in this case) still roll up their sleeves and wade into the fray, and all the 'good guys' walk away in the end... but I just don't think this one is one I personally will re-read as much, but for more personal reasons than any real lacking in the book for most readers.

Willow Moss, the youngest and least powerful sister in a family of witches, has a magical ability for finding lost things - like keys, or socks, or wooden teeth.

Her magic might be useful, but it's not exactly exciting...

Until, that is, the most powerful witch in the whole of Starfell turns up at her door needing Willow's help. A whole day - last Tuesday to be precise - has gone missing. And the repercussions could be devastating. Can Willow find the day to save the day?