ProdID: 3316 - The Race
Written by Clive Cussler and Justin Scott 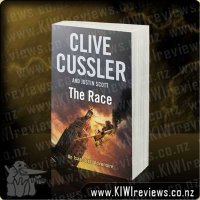 Frost's violent-tempered business magnate husband, Harry, has just killed her lover and tried to kill her and now he's on the run - but Whiteway is sure he'll try again. Not that that's news to Bell. He tangled with Harry Frost ten years before, and lost badly. He knows that Frost has access to thieves, murderers and thugs in every city in the country. He knows Frost won't just be coming after his wife, but after Whiteway. And Bell knows that if he takes the case, Frost will be after him, too.

Yes, Bell knows all that... but he still has no idea what he has just gotten himself into. Things are not quite what they seem to him - and that will prove to be a very fatal mistake indeed.

Having read so many of Cussler's titles - written solo and in partnership with others - I think I have a fair handle on what makes for a top-notch Cussler story... and though this comes awfully close, it doesn't quite reach that pinnacle of storytelling I have come to expect from him.

Is it Cussler... is it Scott... I can't say. All I know is that despite being a rollicking ride and a thriller in all ways, it just lacked a pinch of Vitamin X - that mysterious something that takes a really good story and pushes it over that line into brilliant. Perhaps it was the sporadic patches of predictability where there so clearly was supposed to be a twist... perhaps it was the constant frisson of sexual tension in inappropriate places... perhaps it was the rather weak 'villain' who was more weasel than lion, and the villain that was more bull when he should have been more viper...

Was this a good read, a worthy book to buy and sit through cold nights with? Hell yes... it's a Cussler title and still carries with it all the kudos that go with the name. But was it the latest heir in a line of blockbusters? No, alas it was not. Much like Lord Edmund Blackadder II, it carried a title worthy of respect, but a personality that was just a little weak in places.

Overall, still a very good read, but worth waiting until it's dropped in price a bit, I would say.

Designed to fuel children's interest in the English language, this series engages children and makes the learning of English enjoyable. Each workbook contains Authentic ... more...