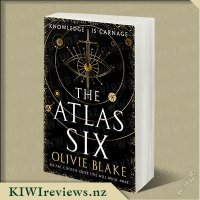 Disclosure StatementFULL DISCLOSURE: A number of units of this product have, at some time, been supplied to KIWIreviews by Macmillan Publishers Ltd or their agents for the purposes of unbiased, independent reviews. No fee was accepted by KIWIreviews or the reviewers themselves - these are genuine, unpaid consumer reviews.
Available:
at all selected book retailers

Secrets. Betrayal. Seduction. Welcome to the Alexandrian Society. When the world's best magicians are offered an extraordinary opportunity, saying yes is easy. Each could join the secretive Alexandrian Society, whose custodians guard lost knowledge from ancient civilizations. Their members enjoy a lifetime of power and prestige. Yet each decade, only six practitioners are invited - to fill five places.

Contenders Libby Rhodes and Nico de Varona are inseparable enemies, physicists who can control the fundamental forces of matter and energy with their minds. Parisa Kamali is a telepath, who sees the mind's deepest secrets. Reina Mori is a naturalist who can perceive and understand the flow of life itself. And Callum Nova is an empath, who can manipulate the desires of others. Finally there's Tristan Caine, whose powers mystify even himself. Following recruitment by the mysterious Atlas Blakely, they travel to the Society's London headquarters. Here, each must study and innovate within esoteric subject areas. And if they can prove themselves, over the course of a year, they'll survive.

Fair call up-front: I have not ever been a huge fan of the fantasy genre as a whole, and especially the teen/YA stuff. That said, when a book in that genre grabs my attention, it's a pretty big thing for me. While this was not one of those books that I find myself missing when I put it down between reading sessions, it turned out to be one of those books I was always happy to turn to when I had a few moments of downtime, so there is something to it.

The characters were a bit of a mystery to start with, some were developed better and deeper than others, in particular, the two 'physicists' (which I personally would have dubbed 'elementals' or 'energists' since it was very clear from the outset that they messed with fundamental energies, not physics or matter per se) and the syren of the group, Parisa, though the other members of the dramatis personae were, for me, actually more engaging and drove more of the plot. It wasn't until the end that I discovered the full nature of 'the big twist' though the placement of a certain interlude actually broke the secret way earlier than ideal. Still, the story held true to itself, and the discussions and revelations about the nature of magic - at least, as it applied to Libby's abilities and to a large degree Tristan's true talents - was an intriguing and self-consistent concept. Being more into the SCI than the FI I do so love it when fantasy writers try to make magic something more 'real' than unexplainable wish-fulfilment - at best a lazy abdication of creativity and at worst an overused and utterly unsatisfying trope best resigned to the trash bin.

As this book is only the first in a series, I actually find myself looking forward to reading the further adventures of this crazy-powerful crew of misfits. The book does indeed leave the reader hanging at the end with a clear cliffhanger, so it's good to see that Book 2 "The Atlas Paradox" is already confirmed and due out later this year. I'm curious to see if this expands further, or whether this is a 2-shot title from this alternatively-prolific author. (If you get a chance, it's worth having a read of her webtoon "Clara and the Devil", which is illustrated beautifully by the same artist whose character renditions appear throughout this book. The artwork by "Little Chmura" is the real star of the webtoon.)

Overall, while this isn't the greatest book I have ever read - it has me feeling like I have read or seen a similar plot elsewhere, but at this moment I can't quite put my finger on exactly where - I find myself putting it in my top-10 YA Fantasy list. Despite this being its second publishing - it was originally self-published, then picked up by Macmillan and given a professional edit and polish - it's still rough in places. There are some plot bits that don't quite mesh as smoothly as they could, and some of Parisa's antics in particular were given more detail and focus than I felt they deserved, but on the whole, it was an enjoyable read and I did find myself perhaps taking slightly longer breaks than I planned just so I could finish off the chapter... or start the next one to see where some plot thread was going. I did enjoy the battle scenes though, especially the pairing of Libby and Tristan. In all regards, those two seem to be the core of it all, with the rest of the cast orbiting them. Or are they... there's the twist!

Score: 9.8
Product reviews for listing 8691: Acting - and How to Survive It -  Written by Peter Feeney

The first-ever book published in NZ about acting technique, 'Acting and How to Survive it' also takes in surviving and thriving in this most challenging and alluring of vocations.

Tailored to the New Zealand and Australian actor but with an international viewpoint across TV, film and theatre, here actor, coach and writer Peter Feeney has written an indispensable book for both the beginner and mid-career ... more...