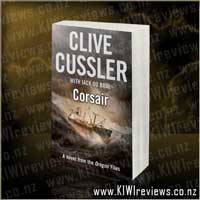 Disclosure StatementFULL DISCLOSURE: A number of units of this product have, at some time, been supplied to KIWIreviews by Penguin Random House or their agents for the purposes of unbiased, independent reviews. No fee was accepted by KIWIreviews or the reviewers themselves - these are genuine, unpaid consumer reviews.
Available:
November 2009

Off the coat of Somalia a battered, old freighter is boarded by pirates whose sights are set on a hefty ransom...

But these pirates have made a mistake, for this rusting old freighter is none other than Juan Cabrillo's secretive, state-of-the-art fighting ship, the Oregon, and Cabrillo is about to turn the tables on a deadly Somali pirate captain.

One spectacular battle later and Cabrillo finds himself embroiled in an even tougher assignment. The US Secretary of State's plane has crashed on it's way to a summit in Libya - and she is missing. Cabrillo is the only one who can find her.

But his search quickly involves an ancient lost jewel and a murderous plot by terrorists intent on plnging the world into chaos...

A plan Cabrillo has to do something about.

I am again in awe of the talent Clive Cussler and Jack du Brul bring to these stories. Starting off with multiple apparently-unrelated snippets, and steadily bringing them together, along with other elements of the plot that have varying degrees of apparent relevance, and meshing them into a seamless crescendo of tension... that suddenly breaks like a tidal wave of action, ammunition and adrenaline... leaving the good guys damaged but alive - and victorious - over a ravaged and utterly defeated enemy. It's astounding.

Like many of the other Cussler tales, Corsair also brings a lot of historical references to our attention, many of which are easily researched and could potentially be taken in the context Cussler and Du Brul put them in. This, for me, is the hallmark of an exception range of talents well suited for this type of story. (Which probably explains their rave success

With battles fought on (and under) land, sea and air, against 'Black Hats' of all descriptions (including a few who at first appear to be 'light greys' and willing to co-operate) this is a tale that will keep you gripping the book white-knuckled with anticipation... right through to the cliffhanger ending that really has a twist!

Overall, another excellent offering from the Cussler crew, and easily readable as part of the ongoing series, or as a stand-alone if you haven't picked up any of the earlier tales in a while. If, like me, you enjoy reading them back-to-back, you will easily see the way the characters evolve over the timeline, without changing their intrinsic nature that makes them the perfect team of 'White Hat bandits' who fight for the right side and get the job done by any means necessary.

The allied factions of humanity, along with the waning Ildiran Empire, the powerful water elementals and sentient trees, have defeated the near-invincible alien race of Hydrogues, driving them back into the depths of gas-giant planets. But before peace can heal the wounds between the races, two ancient enemies return: the capricious fire elementals, the Faeros, who mean to burn all those who fought alongside their enemies; and the lost hive race ... more...