Titanic : Voices from the disaster review 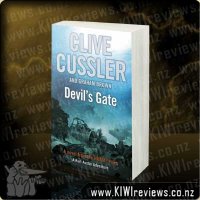 Disclosure StatementFULL DISCLOSURE: A number of units of this product have, at some time, been supplied to KIWIreviews by Penguin Random House or their agents for the purposes of unbiased, independent reviews. No fee was accepted by KIWIreviews or the reviewers themselves - these are genuine, unpaid consumer reviews.
Available:
January 2012

Kurt Austin and NUMA are back on the case.

A Japanese cargo ship cruises the eastern Atlantic near the Azores - when it bursts into flames. A gang of pirates speeds to take advantage of the disaster - when their boat explodes. What is happening in that part of the world?

As Kurt Austin, Joe Zavala, and the rest of NUMA's Special Assignments Team rush to investigate, they find themselves drawn into the extraordinary ambitions of an African dictator, the creation of a weapon of almost mythical power, and an unimaginably audacious plan to extort the world's major nations.

Their penalty for refusal? The destruction of their greatest cities.

In this world of cyber-terrorism, eco-terrorism, fiscal terrorism, and any number of underhanded and subversive methods employed by the criminal elements, something like the weapon described in this book is not too far beyond belief... what is more unbelievable is the idea that someone hasn't already started to develop it. Once again Cussler and co have brought into being a story that has enough "fantasy" to avoid scaring the innocence out of us, but enough realism and thrilling action to give that delightful frisson of tension that makes this style of book so appealing to read.

I admit to being stumped by a few of the plot revelations... this is a very rare thing indeed, especially when hindsight clearly highlighted the clues that should have leapt to the fore and given me a hint as to the 'secrets'... but that just made this book far more enjoyable to read. Nothing pleases me more than to be blindsided by a plot element sneaking up and pole-axing me. After reading nigh on 10,000 titles since I caught the literary bug in my mid-teens, it's nice to not feel so jaded sometimes.

Overall, another great Cussler title... and with a new writing buddy too! A double-whammy surprise indeed. I like the new style very much, so it looks like Cussler and Graham make for a good Dynamic Duo... I wonder if Graham has now ousted Paul Kemprecos, or if they will tag-team for a while... either way, bring it on!

As usual, the key characters are fully developed, the bit-part actors are as solid as they need to be and no more so, and the walk-ons do their bit and walk off, leaving us none the wiser and utterly unconcerned about their past, or future. Loving this one, may there be many more to come!

Throughout history, momentous, enabling discoveries have led to a giant leap in our understanding of the workings of the universe and fast-tracked human progress. '100 Discoveries' presents, in roughly chronological order, the greatest 100 breakthroughs in science and technology, medicine, exploration n the majo areas of human endeavour of the ... more...