Five Children and It review

ProdID: 5338 - The Bootlegger
Written by Clive Cussler and Justin Scott 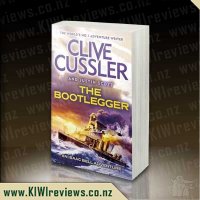 Disclosure StatementFULL DISCLOSURE: A number of units of this product have, at some time, been supplied to KIWIreviews by Penguin Random House or their agents for the purposes of unbiased, independent reviews. No fee was accepted by KIWIreviews or the reviewers themselves - these are genuine, unpaid consumer reviews.
Available:
February 2014

The Bootlegger is the seventh of Clive Cussler's bestselling Isaac Bell novels. It is 1920. Prohibition and bootlegging are in full swing. When Joseph Van Dorn is shot and nearly killed while in pursuit of a rum-running vessel, his friend and employee, Isaac Bell, swears to him that he will hunt down the lawbreakers. But Bell doesn't know what he is getting into. When a witness to the shooting is executed in a manner peculiar to the Russian secret police, it becomes clear that these were no ordinary bootleggers.

Bell is facing a team of Bolshevik assassins and saboteurs - and they are intent on overthrowing the government of the United States. An adventure laced with secret cargo and assassins, The Bootlegger is the seventh of Clive Cussler's Isaac Bell novels, and follows The Spy, The Thief and The Striker.

Once again Clive and Justin have teamed up to slam another action-packed thriller through the press and sandwich it inside another great piece of cover art by Larry Rostant. This time Issac Bell seems to be fighting an unbeatable foe, a Russian communist cell hell-bent on turning prohibition-era America into a communist state, recruiting an internal army and funding their efforts by bootlegging.

The depth of research that goes into every one of these stories is a testament to the talent of these two authors - individually very accomplished, but together they are a dynamic duo that just seem to have a magic touch. The characters are at once spectacularly superhuman, and eminently worthy of our attention and affection. Isaac's outrage at what befell his friend, mentor and boss - Joe van Dorn - is utterly credible.

Packed with action and tension at every turn, secrets and betrayals prove to be critical parts of the plot with no-one above suspicion... even members of the Van Dorn Agency itself! Isaac soon finds himself having to trust those he would otherwise have arrested, while keeping secrets from those on his own team. Pretty much like the American Government of today if the news is to be believed.

Overall, this is a great new installment. Thrills around every corner, an ally in almost every shadow, and a gun in the rest! I can't wait to see what the next collaboration between these two literary artists brings forth.

Acclaimed author Lynn Flewelling brings her beloved Nightrunners series to a close - at least for now - with a thrilling novel of murder, mystery, and magic.

The governor of the sacred island of Korous and his mistress have been killed inside a locked and guarded room. The sole witnesses to the crime - guards who broke down the doors, hearing the screams from within - have gone mad with terror, babbling about ghosts... and things ... more...