ProdID: 2620 - The Spy
Written by Clive Cussler and Justin Scott 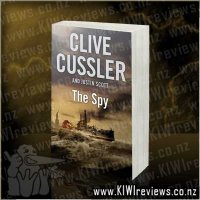 Disclosure StatementFULL DISCLOSURE: A number of units of this product have, at some time, been supplied to KIWIreviews by Penguin Random House or their agents for the purposes of unbiased, independent reviews. No fee was accepted by KIWIreviews or the reviewers themselves - these are genuine, unpaid consumer reviews.
Available:
June 2010

It is 1908, and international tensions are mounting as the world plunges towards war. When a brilliant American battleship gun designer dies in a sensational suicide, the man's grief-stricken daughter turns to the legendary Van Dorn Detective Agency to clear her father's name.

Van Dorn puts his chief investigator on the case, and Isaac Bell soon realises that the clues point not to suicide, but to murder. When more suspicious deaths follow, it becomes clear that someone - an elusive spy - is orchestrating the destruction of America's brightest technological minds... and the murders all connect to a top-secret project called Hull 44.

But that is just the beginning. As the intrigue deepens, Bell finds himself pitted against German, Japanese and British spies in a mission that encompasses dreadnought battleships, Teddy Roosevelt's great White Fleet, Chinatown, Hell's Kitchen and the Brooklyn Navy Yard. Isaac Bell has certainly faced perilous situations before, but this time it is more than the future of his country that's at stake - it's the fate of the world.

How can I not be enthralled by this book... it has everything a quality spy thriller novel needs: a damsel in distress, a fem fatale, a megalomaniac evil genius, the heroic knight in shining armour (ok, white suit), and a bunch of loyal lackies working for the good guys to set the world safe for the common man... and it's all set back in 1908 America... the era of steam trains, battleships and motorcars with spoke wheels.

Having read a precious title in the "Isaac Bell Adventures" series, The Wrecker, which was written in a very similar style, I was expecting great things from this title and I wasn't disappointed. There was the same strangely-paradoxical thrill to it - where you were made aware of the identity of the bad guy quite early on, but were still surprised by how enjoyable it was watching the good guys 'catch up' with what you now knew - that would lend itself to an easy conversion to a screenplay.

The lead character, Isaac Bell, is a dashing chap in a similar vein to Cussler's other heros, Dirk Pitt, Kurt Austin, in that he is a maverick for the Good side, willing to bend, or even break, a few rules to achieve the greater good of stopping the bad guy, but without stepping over the ultimate line and making himself a baddie-by-consequence. He's is backed by his powerful boss, Mr Joseph van Dorn, owner of the operation, in a similar role to the ever-irascible Admiral Sandecker from the NUMA-related titles. Sure, you may be worried it sounds a little formulaic, and to some degree it is... just like every other successful series in any media. Once you are on a winning thing, ride it 'til the wheels start to buckle, then jump for something new.

Overall, this is another excellent title from Cussler and Scott, and I very much look forward to his next instalment in this franchise... I have never been one for old American tales, but these tales are just too action-packed to put down once you get started, and I simply don't mind the Americana of it once the story is really moving. It may be fictional, but it sure holds a reality all it's own!

"My grandpa is happy, He's kind and so fun. I love my dear grandpa, He's my number one." Share the baby animals' fun with their grandpas as they race, dance, make things and play games together.