ProdID: 7144 - The Gangster
Written by Clive Cussler and Justin Scott 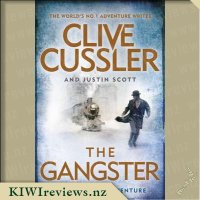 Disclosure StatementFULL DISCLOSURE: A number of units of this product have, at some time, been supplied to KIWIreviews by Penguin Random House or their agents for the purposes of unbiased, independent reviews. No fee was accepted by KIWIreviews or the reviewers themselves - these are genuine, unpaid consumer reviews.
Available:
March 2016

It is 1906, and in New York City, the Italian crime group known as the Black Hand is on a spree: kidnapping, extortion, arson. Detective Isaac Bell of the Van Dorn Agency is hired to form a special 'Black Hand Squad,' but the gangsters appear to be everywhere - so much so that Bell begins to wonder if there are imitators, criminals using the name for the terror effect.

And then the murders begin, each one of a man more powerful than the last, and as Bell discovers, to his dismay, the ultimate target may be the most powerful man of all.

I have read many of Clive Cussler's tales over the years, and there's one important thing I have learned... All of Clive's books have an odd twist. Most reveal themselves reluctantly and late in the plot, but in the case of this title, the twist came early, clearly and very abruptly. However, much to my delight, I found that it didn't spoil the story at all. Quite the opposite, it allowed the plot to develop smoothly and gave the authors the freedom to explore other plot twist options as well. It also allowed them to devote some extra time to second-tier characters, fleshing them out some more and giving them more depth.

As much as I liked the thrills and suspense, I have to admit that I really enjoyed the historical setting the most, which was described so well that I could easily visualise it as I was reading. This is always a good sign for me, as I find that if an author can build a solid image in my mind, chances are good they can also weave a coherent plot too. Cussler, and his assorted co-authors for various series - never fail to exceed my expectations.

Overall, though the 'Isaac Bell' series is not my favourite of Cussler's various series, this is still an excellent tale in its own right, and well worth reading if you enjoy historical American settings.

Boris loves to eat green worm porridge, even though it upsets his belly. When his belly starts to grumble and growl, growl and rumble, rumble and grumble, he knows just what is going to happen.

He keeps blaming Dog for the stinky smell - and dog is not happy about that at all.