« The Voyage of the Sable Keech review 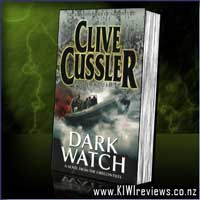 Disclosure StatementFULL DISCLOSURE: A number of units of this product have, at some time, been supplied to KIWIreviews by Penguin Random House or their agents for the purposes of unbiased, independent reviews. No fee was accepted by KIWIreviews or the reviewers themselves - these are genuine, unpaid consumer reviews.
Available:
August 2006

Juan Cabrillo and his motley crew aboad the clandestine spy ship Oregon have made a very comfortable and very dangerous living from working for high-powered Western interests. But their newest clients have come from the East - the Far East - to ask for Cabrillo's special brand of assistance.

They are a consortium of Japanese shipping magnates, and their fortunes are being threatened by brutal pirates trawling the waters of South-East Asia. Normally, such attacks on the high seas are limited to smaller ships and foreign-owned yachts - easy targets on the open ocean. Now, however, giant commercial freighters are disappearing.

Cabrillo suspects that the pirates have joined forces to take down the bigger ships. But when the Oregon confronts the enemy, he learns that the pirates' predations hide a deadly international conspiracy - a scheme of death and slavery that Juan Cabrillo is going to blow out of the water...

The scary thing about books written using real-world technology, instead of fantasy or future tech, is that they carry with them a hint of doubt... One can not help but wonder "Is this kind of thing ACTUALLY going on somewhere out there?"... really gives one pause to think...

I was impressed at the depth of the characters, though I found some of them to be decidedly James Bond'esque at times, particularly when it came to rescuing the innocents involved... but that's a good thing really. Better, in my mind, to show the 'good guys' having an oversupply of altruism and 'gung-ho goodness' than being closer to the real world norm of 'save my own butt, and kick the bad guys butt... and if an innocent or two can be dragged from the rubble so be it."

Overall, an impressive book, and I can see why Cussler's titles have such a huge fanbase behind them. It's great stuff, yet not too much to handle or unrealistic. An excellent example would have to be Sahara, one of the Dirk Pitt series, that recently got made into a movie!

Score: 10.0
Product reviews for listing 3060: How to Make Stonehenge Out of Biscuits - a Years Worth of Crazy Ideas -  Brand / Author: Tracey Turner

Whether they're writing their own detective story in honour of Sir Arthur Conan Doyle's birthday or making a Stonehenge out of biscuits to mark the Summer Solstice, this title offers kids recipes for invisible ink, lessons in limbo, and a course in dusting for finger prints.