« Lego The Lord of the Rings review 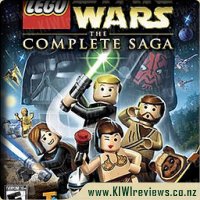 Traveller's Tales takes full advantage of the unique capabilities of all three next generation consoles, while also adding new characters, new levels and new features -as well as new bonus missions, ten new bounty hunter missions and the ability to play any of the characters in any of the levels. Add in a new online co-op mode and this really is the complete saga.

The one good thing about a game based upon a movie is that you don't have to have seen the film that it is based upon as there are always going to be fight scenes, battles etc that are completely different in the original film. The other good thing about this game, I know now what basically went on in Star Wars 2 and 3 without ever seeing the movies (nor do I have any desire to).

You start off playing in Episode One, there are six levels, and then you continue on to Episode Two etc. Each 'film' has six levels in it. As you move throughout the Episodes you gain the main characters, ie. Luke, Han Solo, R2D2, Yoda etc. Once you have finished the basic story lines you can then go and do what is called Free Play and complete a set of tasks in every level.

What's fun about this is you get to go around playing as Luke Skywalker, and then (when in free play) switch to playing Darth Vader! The storyline is good, and has all the main events that happened in the films, from a young Anikin Skywalker in the Pod Race to the final battle with the Emperor, Darth Vader and Luke Skywalker. There is plenty to work on once you have completed the storyline, and some of the achievements are good for a small laugh.

Played on a round board, players roll dice and move their game pieces in two opposite directions at the same time. They advance their pieces using Roundabout's innovative offensive maneuvers and stymie their opponents with the game's defensive moves. The first player to remove all of his or her pieces from the board is the winner!