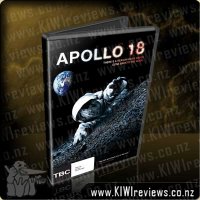 What you are about to see is the actual footage which the astronauts captured on that mission. While NASA denies its authenticity, others say it's the real reason we've never gone back to the moon.

We were loaned this, and I have to say that I am so glad that we didn't have to pay for it in any way. We haven't managed to get ourselves to watch beyond half an hour, simply because it is so slow moving, and the script so obviously fake that there is simply no enjoyment in this movie at all.

You can see that they were trying build on the success of other 'lost footage' movies, but it was done nowhere well enough. I watched the trailer and I must say that it's all I ever need to see of this movie. It tells us what happens, and it's such an old formula, that I don't need to watch it.

Many films have tried to emulate the success of THE BLAIR WITCH PROJECT, some more successfully than others, but few have failed on the same level as APOLLO 18. Transplanting the horror from the woods of Maryland to the moon of all places seems like an interesting idea on paper, but the film is so desperate to maintain its level of documentary realism that it sacrifices all fundamentals of horror film making, and instead teases audiences with a payoff that never really comes, aside from a few ineffective, hackneyed jump scares.

Whether by design (BLAIR WITCH) or as a result of technical limitations (JAWS), often the unseen terror in movies is the most frightening, yet APOLLO 18's creators take the 'less is more' concept entirely too far, leaving a film where the threat is so elusive that it becomes almost non-existent, and any time anything interesting is allowed onscreen the found footage aesthetic is shoved down our throat with such force that one can't help but disengage completely. Possibly budget constraints played a part, but obscuring the scares with egregious shaky-cam and digital over-exposure of the footage achieves nothing except undoubtedly frustrating viewers. Add in the laughably cliched dialogue delivered by woefully amateur performers, and APOLLO 18 is disappointing on more or less every level.

BLAIR WITCH's lightning in a bottle success has been in some way replicated by films willing to adapt the formula, such as CLOVERFIELD and the recent CHRONICLE, not by merely taking the same tone and narrative beats to a new location, even one as full of potential as the lunar surface.