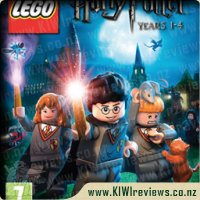 LEGO Harry Potter: Years 1-4 will give gamers the chance to experience the magic and adventure of Harry Potter in a new and uniquely LEGO way.

Playing as Harry Potter, Ron Weasley and Hermione Granger, as well as other favourite characters, gamers will have the opportunity to attend lessons, cast spells, mix potions, fly on broomsticks and complete tasks to earn house points.

Throughout the game, players will also have the freedom to explore iconic settings from the wizarding world including Hogwarts castle, Diagon Alley, the Forbidden Forest and the village of Hogsmeade!

When this first came out, I had to borrow it right away. I had already played Batman, Star Wars and Indiana Jones Lego Style, so it was only natural that I play Harry Potter, regardless of weather or not I watched/enjoyed the films.

This was the first lego game that I played that allowed split screen, meaning that I could go anywhere in the room, field etc that I wanted to, without being tied down to my co-player. However, should you leave a room, then you drag the other player with you, which at times is annoying and other times has its advantages.

It does well with continuity and characters abilities throughout the films. For example, you learn spells as you go. So when you start, Harry can't do any magic at all until his first lesson. Later on, in the third movie, when his classmates learn a spell and Harry doesn't, you must switch characters to use that spell when need be.

Along the way , as well as classes, you have to find hidden character tokens throughout the levels and in roaming mode to buy later on. Some characters are just there because they are in the films, but others, like the Malfoy's have special abilities that you will need to complete the game.

Other than the time it took to get used to the new split screen (made me very dizzy at times) this was a really fun game, and well worth the money we spent to own it.

The United States has a military presence in two thirds of countries around the world. A group of 12 have had enough and initiate a terror ultimatum called the Blacklist - a deadly countdown of escalating terrorist attacks on U.S. interests.

Sam Fisher is the leader of the newly formed 4th Echelon unit: a clandestine unit that answers solely to the President of the United States. Sam and his team must hunt down these terrorists by any means necessary, and stop the Blacklist countdown before it reaches zero.