ProdID: 3822 - Lego The Lord of the Rings
Developed by Travellers Tales 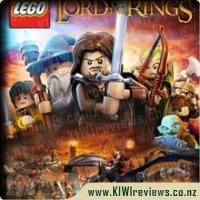 Lego The Lord of the Rings product reviews

LEGO The Lord of the Rings takes players along on the adventures of Frodo Baggins and his unlikely fellowship as they set out on a perilous journey to destroy The One Ring and save Middle-earth. Kids, tweens, teens and parents can traverse the Misty Mountains, explore the Mines of Moria, knock on the Black Gate of Mordor, and partake in epic battles with Orcs, Uruk-hai, the Balrog and other fearsome foes while harnessing the humour and imagination of LEGO gameplay to solve puzzles and explore Middle-earth.

Players will take on the form of their favourite members of the fellowship - Frodo the Hobbit, Aragorn the Ranger, Gandalf the Wizard, Legolas the Elf, Gimli the Dwarf, Boromir a Man of Gondor, and Frodo's Hobbit friends Sam, Merry and Pippin - as they relive the most momentous events from the films.

As a huge Lord of the rings and Lego fan I was super pumped to learn of this as I have played previous Lego game I new what I was getting myself in for, lots of fun and many hours of collecting stuff!

The story is following the movies very nicely with a comedic spin to it to make it family friendly which is no easy feat, but they do it brilliantly while using the voices from the movies too.

The amount of characters available is bonkers, anyone you can think of from the movies is here and playable, each have different abilities for different situations to help you get all of the collectables scattered throughout the world.

As I consider myself a huge Gamer, my favourite part of it all is the multi player. I am always trying to find games that I can play with my wife. she is not a big gamer herself but she finds the lego games easy and fun.

Overall Lego Lord of the Rings is an amazing game with hours upon hours of adventure and if you are a completionist like me you will be going back to each and every level many times to make the most of its characters and collectables.

Let me start off by saying that I enjoyed this game sooooo much that I am already dying for them to hurry the heck up and release The Hobbit in lego form, though sadly that is sure to be at least a year, if not two, away.

Like all the lego games before it you get to play as main characters and travel throughout the story of the movies. But what makes this even better... they used the audio from the films for the characters, so Frodo still sounds like Frodo, Lord Elrond still says Mordor the way that I love...

This game has taken everything good about the games before it and made it even better, and an even larger film. You get to traverse about the entirety of Middle Earth, discover new places and do so much that there is as much content out of the levels than there is in the levels.

In the levels you must complete the story line, and as always, complete certain tasks. But there is so much more than there was before. You have characters that you have to find while travelling through Middle Earth that will give you a quest, something that you either have to craft or something you must find in a level, and in return they will give you a reward that will continue to help you.

I love The Lord of the Rings, so getting to play it added a whole new level to it, and the fact that there is sooooooooo much to do to get 100% is just fantastic. Split screen has gotten even better in that you can now travel to a completely separate place to your co-op player. ie. I could travel to Hobbiton whilst my partner travels to Mordor and we each complete little tasks in each place.

My husband and I didn't even bother to rent this when it came out, we bought it almost immediately. Well worth the money as there is just so much more game play available in it now.

Right or Left - which way should you turn? Ask the traffic officers so you can learn.

But be sure to figure out which way they are pointing you. Remember, it depends on that officer's point of view.

All players get the directions at the same time. The winner is the first to call out the right sign!