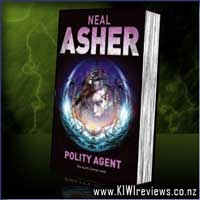 Disclosure StatementFULL DISCLOSURE: A number of units of this product have, at some time, been supplied to KIWIreviews by Macmillan Publishers Ltd or their agents for the purposes of unbiased, independent reviews. No fee was accepted by KIWIreviews or the reviewers themselves - these are genuine, unpaid consumer reviews.
Available:
November 2006

Space opera on a magnificent, non-stop roller-coater of action.

From 800 years in the future, a runcible gate is opened into the Polity and those coming through it have been sent specially to take the alien 'Maker' back to its home civilization in the Small Magellanic cloud. Once these refugees are safely through, the gate itself is rapidly shut down - because something alien is pursuing them. The gate is then dumped into a nearby sun.

From those refugees who get through, agent Cormac learns that the Maker civilization has been destroyed by pernicious virus known as the Jain technology. This, of course, raised questions: why was Dragon, a massive biocontruct of the Makers, really sent to the Polity; why did a Jain node suddenly end up in the hands of someone who could do the most damage with it? Meanwhile an entity called the Legate is distributing pernicious Jain nodes... and a renegade attack ship, The King of Hearts, has encountered something very nasty outside the Polity itself.

Yet another winner from Neal Asher. This, the fourth book in his 'Cormac' series, and still in the utterly astounding Polity Universe, had me spellbound from page 1. Full of action and intrigue, revelations and revolutions, as well as a hefty dose of Jain Tech infestation, I found myself grasping at every opportunity to pore over even a couple more pages...

Anyways, after absorbing Sable Keech (shortened title) I found myself unable to overlook this book, even though I had plenty of others that could have been read before it. -sigh- Such was the quality of Neal's writing that I found myself powerless to resist the call...

And I am so glad I didn't... my only regret, as I closed the book up for the last time, was that I didn't have any more of his in the 'To Read' pile, and so found myself scrabbling to find something that might slake my sci-fi thirst in a similar manner...

Once again the infestation of Jain technology rears it's terrifying microscopic head within the bounds of The Polity, and in this book we learn a lot more about it's origins, it's purpose, and it's connection to that other enigmatic entity, the group-creature known only as 'Dragon'... and what a connection we find!

We also learn some of the deeper secrets of Horace Blegg and his long history... or is it? Does Horace really exist, and what of his unique (or simply inhuman?!) ability to step through U-Space at will... these and more mysteries are brought into the light for closer study... along with the introduction of the negarious Legate, the ultra-renegate AI "Erebus" and their connection to the Jain tech appearing throught key locations within The Polity.

We also get a closer look at some of the history of the other mysertious Past Races who inhabited our galaxy in the past, in particular the Atheter and their version of AI, and it's impressions of the current plague washing over The Polity.

Overall, this is a blockbuster rollercoaster worthy of the very best... and such heavy-sci-fi masters as Iain M. Banks and Peter F Hamilton should move over on the golden bench to make some room for a peer worthy of the placement. I have become rapidly hooked on Neal's works, since my first glance at Brass Man and look forward to reading more as it comes out. Now... off to go scour the local 2nd-hand bookstores for any of his other Polity books... I WANT MORE!

Our new puppy FiDo is super weird, like us!

Weir's back and super weird!

Dad's training to become a firefighter, while Weir's busy with Pet Day! Will FiDo and Blockhead freeze up or find fame?