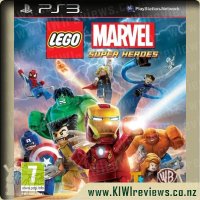 LEGO Marvel Super Heroes features an original story crossing the entire Marvel Universe. Players take control of Iron Man, Spider-Man, the Hulk, Captain America, Wolverine and many more Marvel characters as they unite to stop Loki and a host of other Marvel villains from assembling a super-weapon capable of destroying the world. Players will chase down Cosmic Bricks as they travel across LEGO Manhattan and visit key locations from the Marvel Universe, such as Stark Tower, Asteroid M, a Hydra base and the X-Mansion.

Features:
•  Smash, swing and fly in the first LEGO videogame featuring more than 100 of your favorite Super Heroes and Super Villains from the Marvel Universe, including Iron Man, Wolverine, the Hulk, Spider-Man, Captain America, Black Widow, Loki and Deadpool.
•  Help save Earth as your favorite Marvel character with your super-cool strengths and abilities:
•  Iron Man flies, hovers, shoots missiles and unleashes a powerful unibeam directly from his chest.
•  Spider-Man shoots webs, uses his spider-senses to spot objects invisible to others, crawls up walls and, of course, web-slings.
•  Captain America throws his mighty shield at objects and enemies, embeds it into a wall to create a platform, and protects himself from damage.
•  Hulk smashes!
•  Perform new and powerful moves as "BIG-fig" characters like Hulk and Abomination. Leave a path of destruction as you smash through LEGO walls and throw cars using hyper strength.
•  Discover LEGO Manhattan like never before, and travel to iconic locations from the Marvel Universe, such as the X-Mansion, Asteroid M and Asgard.
•  Create unique Super Heroes with customizable characters.
•  Enjoy an exciting original story, filled with classic LEGO videogame adventure and humor.

Like previous Lego games this doesn't disappoint and is a must for any game collection. We own all previous Lego games and have recently added this to our collection.... it appeals to people of a age and background. You don't have to be a marvel superhero fan to enjoy this game! My 11 year old loves playing it as much as the adults in the house do.

Like previous games it has a storyline/plot which is easy to follow and very entertaining. Lots of jokes and a good sense of humour. You can play as a wide range of characters from The Hulk, to Spiderman or Ironman.

Once you have finished with the main storyline you have unlocked several extras which allows you to play the game again in 'freeplay mode' and complete a new lot of missions/goals. It also includes a good array of wee 'mini' missions. This results in there being many hours of play in the game making great value for money. I think after playing this you will be rushing out to play the rest of the Lego games!

What we like most about this game is that it's a single or two player game, meaning it's a game we can all enjoy together!

If you've enjoyed any of the previous Lego games then this is a must for your collection, or if you like the Marvel superheroes then you may well enjoy this game.

You play a range of heroes from Spider-Man, The Hulk, Iron Man, X-Men etc. on a quest to save the world, along the way there are the usual jokes that you come to expect from this series of games. The main thing that it has taken me to get used to is the voices of the characters, when one is used to Robert Downey Jnr playing Iron Man and then it is a different voice, it can take some getting used to (especially when he doesn't even sound egotistical or self absorbed).

As with the previous instalments you have your main plot line and then there are side missions, complete jobs for people, save Stan Lee (in every level), collect all the gold bricks etc. There is plenty to do, the main story, then replay in free play to get all the bits needed to gain 100%, and then roaming through the streets of the city trying to collect everything else.

Other than finding the voices annoying, especially for Iron Man, this is another fun Lego game and you won't be dissapointed.

The Elder Scrolls III: Morrowind is an epic, open-ended single-player game where you create and play any kind of character you can imagine. Be the noble hero embarking on an epic quest, or an insidious thief rising to leadership of his guild. Be a malevolent sorcerer developing the ultimate spell of destruction, or a reverent healer searching for the cure to a plague. Your actions define your character, and your gameplay changes and evolves in ... more...