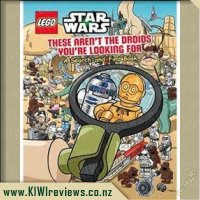 Perfect for fans of any age, this fun-filled activity book is based on the LEGO Star Wars universe. Star Wars is the most recognizable scifi brand to date, its legacy spanning generations. LEGO has proved itself to be a powerhouse among younger boys. Together, the two brands are unstoppable. Following on the success of our LEGO Star Wars publishing program, our favourite heroes and villains return in an action filled and hilarious Search and Find.

Opening up the package from KIWIreviews my daughter grabbed this book and proclaimed that it was hers. I had to pry it from her fingers to have a quick glimpse at it before she took it and sat on the couch to go over each page. She asked me for the instructions and I told her that you needed to find The Assassin Droid IG-88, who to be honest I have never heard of. Also you have to find the ten differences between each page, which she loved doing.

This has been her and my husbands favourite book over this past week, both looking for the various people/aliens/characters they both know and also doing as the book instructs. There are a couple of activities that you can do as well. On each page you need to find the elusive Assassin and then on most there is the spot the differences and on occasions there are instructions on who else you can find.

At the back of the book there is the answers which I don't think anyone has had to use so far. It has brought lots of fun games to my two girls and my husband. For a non-star wars fan (well not an expert at least) I have had some trouble, I personally would prefer they had a picture saying who you have to find. As I am guessing I am right when it says find a snowtrooper captured by a wampa or find an Imperial probe droid - not exactly words in my vocabulary. It is a fun book and I think its great for ages 3 upwards as my three year old is also having fun with it. For $9 you can't go wrong.

I packed this book for us when we recently went away to the beach. On a quiet and rainy evening, my eldest and I sat down to do some of the puzzles in this activity book. I read the first piece of the book, which is Lego Yoda. She commented on the way he talks. She thought it was funny and so we discussed why that might be. Other dialects that aren't English often follow a different pattern and when someone learns English they may use their own pattern with that new language as well. We decided that if he was talking in his own alien language, his sentence structure would make sense to his people.

As we went into the first activities we tried to remember what the android IG-88 looked like that we were hunting. As it was a new android to us (no one that I can remember seeing in movies), this took us a while. We searched the page for a while, then had to go back to the illustration. We realised that we needed to remember the shape of his head and the special facial features and once we did that, we found him more easily. But he was well hidden in many of the pictures we looked at.

Aside from just finding him, there are other activities as well. There are spot the difference pages which got many giggles out of my girl. She loves spotting differences, so much so that when she often stopped looking for IG-88 in favour of difference spotting as she finds it easier and more fun. There were also lists of people to find on some pages too, which had funny things that individuals were doing.

This book did fill in some time for us nicely and gave us some good bonding time. The illustrations are excellent, and full of colour. I think we were both very impressed with the level of detail and fun that went into each layout. The only negative I had about it, was that the cover is really light card. I can appreciate that soft cover is cheaper to produce, but it was almost like a glossy magazine cover. Not so good when you have a toddler in the house, though I have managed to keep her away from it mostly, it wouldn't take a lot for her to rip it.

Other than that, I thought it was priced reasonably and it would make an excellent holiday reader. It got our brains fired up and a fun time was had by both of us. It's easily re-readable too, and if you are lucky you won't remember where IG-88 is.

Odalisque Ana is resigned to life in Percheron's famed harem and has little more than a blood-soaked veil to remind her that Spur Lazar, the man she loves, is dead. She is closely watched by the scheming Grand Master Eunuch, Salmeo, and the cunning and cruel Valide Herezah. The Valide, unhappy at Ana's influence over the young Zar, contrives a shrewd plan to bring about the beautiful young woman's ... more...