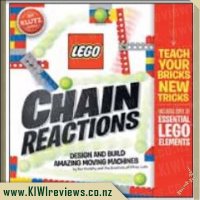 Build eight simple machines that can be combined to make a Rube Goldberg-style chain reaction. Configure the modules in different combinations for all-new results. Use the included LEGO pieces in conjunction with your own collection to build the contraptions, plus record your experiments in the pages of the book.

I have long loved going on YouTube to watch videos of stunning chain reactions, on far larger scales than anything which could be accomplished with this, but in the meantime, this little kit can help to inspire bigger projects. This book is great, the LEGO materials it supplies are minimal, but the other modules can easily be constructed using standard LEGO bricks, both regular and Technic. The materials supplied with the book are enough to build the first project in the book, which is a very cool mini-chain-reaction called the Quintopple, and contains 5 different links in the chain, but is great for literally getting the ball rolling and start the reaction. I unfortunately didn't have the time or immediately accessible resources to do another module, but it will be easy enough to make more in the future, as we have bucket loads of LEGO.

Building the one module was, however, quite fun, and It should be easy enough to figure out how to put all the modules together, and it will be fun to see what I can do with them. The instructions were simple, in fact I rarely read the instructions, I just analyzed the pictures, the franchise has always been pretty well-known for having easy-to-understand pictures to go with the instructions, and just because this was a Klutz book, there was no exception. Throughout the book, the projects were getting greater and greater in difficulty, but the more complex ones are the best. Also, and the end of the book, there are a few suggestions as to what sort of chain-reactions can be used for practical purposes, such as catapulting trash or making a fun way to flip a coin for decision-making purposes.

This goes towards ease of use, and seeds plenty of ideas, which could go even further than the book suggests. Also, the designs in this book are fairly simple, and if one were to replicate some of the cardboard parts, then multiple modules, some of which are identical to each other, to make HUGE chain reactions. I think this is also a very useful tool for younger people, as they can teach some very useful principles, and also inspires creativity, allowing for pretty impressive things to be made from these simple designs, which are all easily capable of connecting. The book was fun and easy to use, and for those who obtain this product through purchase, this book is well worth the money.

LEGO has got to be an all time favourite for children. Any chance to extend the way children play with Lego is something I watch out for. Mr 5 and I love playing around with making animations with LEGO currently.

The brand Klutz is one that I have grown to enjoy very much. The kits have everything you need to get straight into the activity. The range of skills that children can learn from a single gift is amazing. There seems to be kits sprouting up for all sorts of interests and skills.

When Mr 5 saw the Lego Chain Reactions kit, his eyes lit up, as the LEGO branding is very strong and he knows it well. The way the front cover is set up, he knew quickly that the book involved LEGO that involved movement.

As we built on to the LEGO model, he started to understand how chain reactions work. He also started to apply his theories to other parts of life. One example of this was a discussion we had about the chain reaction that happens with food in his body. This was a rather humourous discussion, but it did show that the LEGO kit had taught him things that he could link to other ideas.

This book is divided into easy to follow machines. Each machine builds onto the previous one. The machines are listed in the contents at the front of the book. Each machine has a symbol to go with it. This symbol is referred to within the book and it shows how multiple machines can be added together to make a chain reaction. It is great how small, simple steeps are added together to make bigger, more exciting projects.

All the special pieces of lego required to make the machines are included in the kit. In order to make the machines fully functional, you need to use some supplies from home and some basic LEGO supplies (e.g. LEGO blocks). Each section of instructions has some information about what the machine will do, what you need to make it (including LEGO elements found in the kids, LEGO elements from your own collection and stuff from your house). There is also a QR code for each machine so that you can see the machine in action. It is a great way to combine technology, LEGO and a book.

When we were making the machine that required dominoes to be made with LEGO elements from home, we realised that we were seriously lacking LEGO which was 1 stud wide. This almost caused huge disappointment as we had decided that we would be making that machine that particular night. With a bit of creativity, we managed to make up dominoes to suit the purpose. Mr 5 lost a little interest at this stage. It is a bit of a balance between having everything you need in the kit and the cost people are willing to pay for the product. My preference would be to have the product at the price it is and be creative if we don't have the exact pieces required from the home collection. There is actually a page dedicated to 'Brick Substitution'. I think this is a great idea to assist the user to think out of the box.

The binding of the book is spiral and it seems to be pretty sturdy. This makes it easier than a normal binging to be able to work through the tasks as the book can lie flat.

The kit is designed for 8+, however, Mr 5 loved it. He was able to follow the graphic instructions to make each machine. I was helping him, but he was relatively independent. The main role I had was to extend his learning a bit by questioning and discussing with him as we went. The other thing he needed help with was to cut the string and tie knots.

I would highly recommend this kit. Mr 5 and I had a lot of fun and I found that he developed a lot of concepts and skills as we worked through the machines. I know that he will use the ideas from the book to develop some of his own machines in his own play.

This is the hilarious diary of a young frog desperate to win the role of human princess in her school production of The Frog Prince. She's sure she's pretty enough (she has more warts than any other girls in class), but will she ever overcome her terrifying case of stage fright?