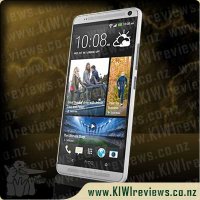 Disclosure StatementFULL DISCLOSURE: A number of units of this product have, at some time, been supplied to KIWIreviews by HTC or their agents for the purposes of unbiased, independent reviews. No fee was accepted by KIWIreviews or the reviewers themselves - these are genuine, unpaid consumer reviews.
Available:
December 2013

Maximise everything. Massive screen and amped speakers for films that sizzle. Feature-rich camera gives you artistic photo flair, and home screen posts connect you to real-time news. All powered by our biggest battery to fuel the most demanding user. Introducing the HTC One Max: more screen size, more camera, more everything.

Features:
•  Super-sized Camera Tools - Don't look at your photos. Relive them. Dual capture mode displays the photographer's reactions with a mirror view picture-in-picture. HTC Scribble function allows you to draw on your pics, and Photo Editor feature lets you create GIFs. Maximize your wow moments and make every day unforgettable.
•  HTC Zoe Photos: Memories that Move - Group up to 20 photos and automatically create a 3-second HD video for a full-motion photo gallery. HTC Zoe photo also features advanced editing tools so you can swipe your way to the perfect shot. Plus, Video Highlights feature combines your photo and video footage for mini films complete with the themes and music that you select.
•  HTC BoomSound: Unleashed Sound - Unchain your audio with volume blasting towards you, not away. Serve up your films, videos and music with the decibels that you deserve from dual frontal stereo speakers boosted with built-in amps. Stop stooping towards your phone and put your content onstage with HTC BoomSound.
•  Unlocked Convenience - Users unlock their phones over 20 times a day on average. The HTC One Max removes this hassle with a rear-side fingerprint scanner that unlocks the phone as well as launches your favourite apps with a single finger swipe. Up to three fingers can be registered. Forget complicated passwords, with the HTC One Max, you're just a swipe away.
•  HTC BlinkFeed: Social Intelligence - Enhanced HTC BlinkFeed gives you news recommendations when you sign in to your social networks based on your likes, for breaking news that matters most*. The HTC One Max allows you to customise an HTC BlinkFeed from a wide range of global sources, for more personalised updates.
•  World-Class Engine - The powerful Qualcomm Snapdragon processor in the HTC One Max accelerates performance for lightning-fast apps, downloads and web surfing. Revved-up graphics processing speed is designed to make gameplay smooth and quick. It enables up to 40% faster battery charging too. With its efficient Qualcomm Snapdragon processor, the HTC One Max responds faster, games better and lasts longer.

Sized between a decent smartphone and a tablet, this unit tries to cover both bases, and does a fair job of both, while minimizing the worst pitfalls many devices suffer when they attempt to be too many things at once. Although a little bulky for a phone, and a smidge too small for a tablet, this is nonetheless a highly flexible and functional device that can still fit into an average pocket. With a very visible HD 1080p 5.9in screen, the power of a 1.7GHz quadcore CPU and a decent amount of operating memory, plus the added storage offered by the MicroSD slot, WiFi and Bluetooth, you have everything you'll need right in the palm of your hand.

Despite juicy hardware, probably the biggest highlight of this device isn't actually the device itself. It's the sheer ease of setup and use, with such brilliant user-centric features such as having all the major phone carriers' settings preinstalled and auto-configuring as soon as it detects which SIM you have plugged in, the ability to migrate all your cloud-based data over to the new device with one easy step, and the intuitive default desktop setup right out of the box.

I must admit that the one feature I was really hoping to be impressed by failed to do more than bring forth a disappointed grunt from me - although, it must be said that the fingerprint scanner on the back of the phone is a wonderful security feature with a lot of potential for digital personalisation and access control at a number of levels, placing it directly under the camera lens was an epic UX failure of a magnitude I would not have thought HTC capable of. You *must* drag your finger DOWN the sensor for it to read your prints... which means you start off with your finger leaving smears all over your camera lens! This is something that took me all of 2 seconds to spot as a flaw, so it does make me wonder about the undoubtedly highly-paid engineering and design experts that they didn't spot this in the preliminary design phase.

Putting that aside - since there is no real requirement to use that security option so you are free to basically ignore it - how does the phone work, feel, and perform? Well, if your hand is big enough to hold it comfortably... it's actually a seriously good phablet! (Just in case you haven't heard that phrase before, that's the unofficial term for something half way between a phone and a tablet in size, but with the feature-set of both.) Would I go out and buy it? Quite possibly. Any bigger and I wouldn't use the phone features, any smaller and it's not enough to make it worth the price over my current smartphone.

One thing the engineers did get right though was the sound - this baby can blast... far more than I would have expected from such a small form-factor. Throw in Bluetooth for connectivity to car-kits, speakers and headphones - and there are more than a few really good ones out there with Bluetooth as standard - and you have your media-player needs well covered... especially if you download some good third-party apps such as VLC Player, which is pretty much the best cross-platform media player I have come across in ages.

A couple of small things to be aware of that may or may not prove to be "issues" depending on personal preference: Firstly, there is no removable battery in this design... like the majority of iDevices I have come across, the battery is packed away inside the chassis, not for user-replacement. For me, that would be a deal-killer, but for others it just means one less thing to risk losing should you drop the phone and the back fall off. Which brings me nicely to the second point - the back plate. Made of aluminium, this plate is designed and machined to have reinforcing grooves and struts... which don't always prove effective.

If you drop this phone, the back plate has a high risk of warping, bending or creasing... and then you'll never me able to get it seated right. On the plus side, if you are ULTRA careful and clever, you can usually panel-beat any minor dings out without the need to seek a replacement panel or professional service assistance. But... and I can't stress this enough... that applies to MINOR dings and slight deformations ONLY.

Overall, it's well placed in the line-up and ignoring that one glaring design oversight, it IS something worth considering if you want one device to replace them all. You'll probably enjoy some of the pre-installed apps, but I chose not to go into those mainly because apps are something that are improving almost daily, so you'll likely already have your own favourites.