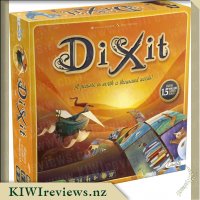 One player is the storyteller for the turn and looks at the images on the 6 cards in her hand. From one of these, she makes up a sentence and says it out loud (without showing the card to the other players).

Each other player selects the card in their hands which best matches the sentence and gives the selected card to the storyteller, without showing it to the others.

The storyteller shuffles her card with all the received cards. All pictures are shown face up and every player has to bet upon which picture was the storyteller's.

The game ends when the deck is empty or if a player scores 30 points. In either case, the player with the most points wins the game.

The base game and all expansions have 84 cards each.

Dixit is one of those games that I had heard a lot about but the price tag always put me off (it was $99 at the time), it wasn't until a friend brought her copy around that we finally gave it a try. The suggested age is 8+, though only one of my kids was eight at the time, they were all eager to give it a try, entranced with the images on the cards. Now, I have to point out that if you aren't happy to think outside the box, not take clues literally or have your kids go really, really, far out with their clues and not loose the plot at them when you are wrong, then this isn't the game for you.

The scoring system can take a bit of getting used to, the clue giver can only gain points if at least one person has voted for their cards, happily the game board has this printed onto it, so you won't need to keep looking at the rules to work it out. The beauty of these cards is that because we're all so different, each card has a huge number of clues that could be given to it. For example, I could say "that's not right", whilst Miss8 might say "roar!", Miss10 "he's gonna die", Mr12 "dinosaur" and my mother "time is moving fast" and it could be a card with a dinosaur on it, or an old person, it could be a volcano, there could be a picture of a dino in the background etc.

My two girls really enjoy Dixit, mostly because they can be so out there with their clues. Yes, at the end of the day, we want someone to vote for the right card but we do have so much fun coming up with strange, odd or just plain abstract clues. This game doesn't limit you, yes, you're trying to get the most points and win but along the way you can have so much fun plotting your next card and its clue. There are also at least eight expansions so far, with the box having room for another three or four (can't recall at the moment) sets to sit in, perfect for saving room. It's not a game we pull out all the time, but it is well loved and won't be gotten rid of any time soon.

Score: 9.5
Product reviews for listing 3822: Lego The Lord of the Rings -  Developed by Travellers Tales