The Revelation of the Pyramids review 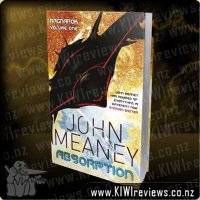 Disclosure StatementFULL DISCLOSURE: A number of units of this product have, at some time, been supplied to KIWIreviews by Hachette or their agents for the purposes of unbiased, independent reviews. No fee was accepted by KIWIreviews or the reviewers themselves - these are genuine, unpaid consumer reviews.
Available:
September 2011

And on a nameless world, not knowing his human heritage, a silver-skinned youth tries to snatch back an Idea - but it floats away on gentle magnetic currents.

There are others across the ages, all with three things in common - they glimpse shards of darkness moving at the edge of their vision, they hear echoes of a dark, disturbing musical chord, and they will dream of joining a group known as the Ragnarok Council...

Absorption is the first novel of Ragnarok, a new space opera trilogy of high-tech space warfare and a mindblowing new rationale for Norse mythology.

As I read through parts of this book, I was overtaken by a strong sense of deja-vu, and it took me a while to realise I had read parts of this tale in an anthology many years ago and found it utterly captivating back then. The short story was woven into this tale as a series of flashbacks to the early years of the main character's father, Carl Blackstone. If for no other reason than I these small snippets, I knew I was going to be hooked on this book. I wasn't wrong.

Of course, a long-standing interest in Norse mythos, enhanced or perhaps even deformed by the influence of many years of Stargate SG1 would have had me very curious about this story too, just because of the last section of the blurb on the back. I must admit that this first book has only touched on the Norse aspect very lightly, with one character being from that era - the warrior Wulf. However, there were enough hints that time wasn't as linear as we mere mortals would like to believe, to lead me off on some interesting trails of 'what if' and 'I wonder...'

I would like to say the humans are some of the most fascinating characters, but the truth is they aren't. Sure, they are spectacular - as one would expect with a timeline over 3,000 wide, but by far the most interesting characters are the Zajinets... who we see only briefly in about four places in this book, but are poised to become the keys that unlock the whole Ragnarok puzzle. And what strange critters they are...

As with all trilogies I have come across, book one doesn't do much in the way of story and plot - hints and leaders at best. Book one brings us into the world(s), introduces the key players and the main information we need to know in order to understand their motivations and rationale... and this is no exception. The plot has been roughed out, the reader is given the shocking scenario, the timeline has been laid out (and this one is a tad scattered) and we are indeed made aware that something wicked this way comes... at a great rate of knots and with malice in whatever passes for it's heart.

Overall, being the introduction to the story, this is the beginning, and this one shows much promise for the story. I am hooked, unashamedly so, and I am hanging out for the next instalment because that is where the meat is in this sandwich, the main course in this literary meal. Bring it on, say I!

Glass turns to flesh as DarkGlass Mountain rouses from its restless sleep to walk the land and plot the downfall of the Lord of Elcho Falling. Ishbel and Maximilian, now utterly estranged, ride for Serpent's Nest, not realising that at their backs a cadre of traitors plot their death.

Axis once more takes command of the Strike Force, but it is not enough to save him from the gallows of Isaiah's generals, nor from the lover who betrays ... more...