Sins of the Father review 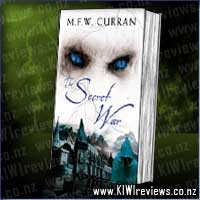 Disclosure StatementFULL DISCLOSURE: A number of units of this product have, at some time, been supplied to KIWIreviews by Macmillan Publishers Ltd or their agents for the purposes of unbiased, independent reviews. No fee was accepted by KIWIreviews or the reviewers themselves - these are genuine, unpaid consumer reviews.
Available:
March 2009

For thousands of years a secret war has been fought between Heaven and Hell. Daemons and angels, vampyres and knights, clash for the future of mankind, and as the two sides wage war across the world, innocent people are caught up in the conflict - men like Captain William Saxon and Lieutenant Kieran Harte, two great friends who have recently survived the horrors of the Battle of Waterloo.

But now they face a greater struggle, against the daemonic forces of Count Ordrane, and the clandestine ambitions of the Vatican. They must try to survive assassination attempts, political machinations, epic battles on land and sea, and above all the power of a mysterious bronze pyramid - the Scarimadean - that brings everlasting damnation to all who come into contact with it.

Their only allies are an old man, a fading secret organisation in the Church, and an enigmatic warrior, who may hold the key not only to the friends' fates, but to the fate of all mankind.

The year is 1815, when angels and daemons walked our streets-

This was one of those few books that I picked up and actually could not force myself to finish. The first chapter was possibly the most gory description of the aftermath of Waterloo that I have read thus far (I am suitably educated) but by the time I reached the third chapter, I realized that nothing had really changed. The characters were now actually fighting (a slight improvement) but it was still a somewhat senseless gore fest with characters I had no particular interest in.

The only character I had begun to like from chapter one was summarily ripped in half in chapter two and her brooding boyfriend just got even more depressed and vowed to 'get his revenge' which involved more people being variously ripped, decapitated etc.

I realize I am probably not this book's target market, and if you are really into gory books with an underlying supernatural theme - and don't care too much about extremely slow character development - then this may well be a very interesting and rewarding book. The author certainly doesn't shy away from describing the nastier sides of warfare.

Score: 6.3
Product reviews for listing 4905: There Was an Old Lady Who Swallowed a Meerkat -  Author: P Crumble

The old lady is visiting the zoo - and she's still hungry! Surely the animals will be safe in their cages... Or will they?