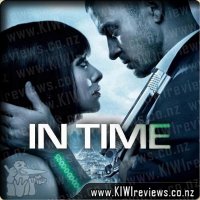 Disclosure StatementFULL DISCLOSURE: A number of units of this product have, at some time, been supplied to KIWIreviews by 20th Century Fox or their agents for the purposes of unbiased, independent reviews. No fee was accepted by KIWIreviews or the reviewers themselves - these are genuine, unpaid consumer reviews.
Available:
in cinemas from October 27th 2011

The future. Mankind is now genetically engineered to stop aging when they reach 25. After that, you get 1 year to live, unless you earn more. If your clock reaches zero, you die.

When Will Salas is falsely accused of murder, he must figure out a way to bring down a system where time is money - literally - enabling the wealthy to live forever while the poor, like Will, have to beg, borrow, and steal enough minutes to make it through another day.

Well this film contains quite controversial technological ideas. And it was incredibly intriguing. With the world having increasingly longer life spans each generation, it's easy to see that the human body isn't designed to survive that long. Modern medicine, is leaving us alive, to the point that everything starts to fail one by one.

But the idea of genetic modification being able to halt the aging process at the age of 25, opens up so many possibilities. With many issues to tend with, such as overpopulation, and from an economic standpoint, how can people make money from it.

Introducing an internal timer, that counts down from a year. Currency becomes temporal, with everything costing time, and getting paid in time. If you run out of time, you die. A simple concept, that is exceptionally creative. Class systems exist, but beyond that, most over trivial age-related systems are rendered moot.

An exciting film that follows the usual lower class trying to take down the corporation, but in this case being poor means, living hour to hour on the edge of potential death. Crimes are of course more extreme, with people robbing for time, and stealing other people's time.

I was apprehensive, having Justin Timberlake as the lead, but he did the role justice. This movie did not require much in the way of special effects, and that made the film more believable. Definitely worth a watch.

My hat comes off to Andrew Niccol. As the brains behind three of my favourite movies ever - The Truman Show, The Terminal and Gattaca I was very excited to see what he would do with this one, especially as it's also one he wrote as well. I admit, I wasn't quite as impressed as I hoped to have been.

Now, I am no film snob, touting my opinion as though it should be shared by everyone who doesn't wish to be seen as a member of some lower-caste proletariat... I encourage you to see this movie and make up your own mind, draw your own conclusions and most importantly - find the message in the movie for yourself. It is there, it is subtle (far, far more subtle than Borel, the character played by Johnny Galecki of "The Big Bang Theory" fame). The message is one that only Andrew Niccol could have convinced Hollywood to fork out big money on a movie to hide it in. In case you are unaware, Andrew Niccol is not only a Kiwi, he's also one of the very few in the inner circles of Hollywood who believe that movies should do more than just generate revenue - they should also educate, inform and cause actual thought beyond discussions of clothing styles and sexual positions afterwards.

In a world where old age doesn't exist - you are either rich enough to avoid it, or poor enough never to actually reach it - the only currency is "Time" - literally. Your life is measured out in glowing green, matrix'esque numbers counting down on your left forearm. In this world, phrases like "Have you got a minute" isn't asking you to pause and chat, it's asking you to extend someone's life by donating a small portion of your own lifespan, "Cleaning someone's clock" isn't just beating them up, it's sucking the very life out of them, and "Take your time" is an offer to take or receive life. As the "big mover and shaker" in the movie says, "It's Darwinian Capitalism" - Survival of those most fit for the system, a system wherein for a few to be immortal, many must die - a truth repeated throughout the film.

Justin Timberlake plays the lead protagonist... but far from being a dynamic driving force in the role, he is clearly being swept along on the tide of Fate after a random act of misplaced kindness begins a chain reaction that has him wanted, in the most desperate way, by all three sides of the law; the criminals known as The Minutemen - led by a nasty piece of work portrayed adequately by Alex Pettyfer of "I Am Number Four" fame, the law - embodied by the Timekeepers who are tasked with maintaining the system of time flowing through The Clock, and the powerbrokers - who don't want some ghetto slumdog butting into their millionaires club and upsetting the delicate balance of power, after they discover who he is and he kidnaps the daughter of one of their prime leaders. Funnily enough, this makes things a tad awkward for our hero, as he experiences a lifespan that varies from seconds to centuries, and back.

Apart from the somewhat disturbing aspect of having your life potentially stolen away from you while you sleep - since there appears to be no rational explanation for how the 'time' is transferred between people directly, and even into and out of devices knows as 'capsules' - we see a creepy reflection of what immortality means when we are introduced to 3 generations of women side-by-side... there's the Mother-in-Law, the wife and the daughter... who all look about the same. Talk about creepy... and with one's forearm showing only how much you have remaining, we are left accepting someone's word for how long they have actually lived. The genetic wizards who built this 'utopia' didn't think to put, say, a red clock on the right forearm that never stops counting UP, showing the days you have moved through and beyond. "So, I am 25 for 3, which makes me 28, and you're what, 25 for 10? 15?" "That's so cute... try 75 sugar." "Arrrrggggghhhhhhhhh" -sounds of sprinting feet vanishing in the distance-

Overall, the movie was... surprising. Yes, surprising in many ways. I was surprised that it wasn't as punchy and powerful as I was expecting... even for Niccol's usual style where the plot is subtle and the actors make it work, this one had the story sneaking in around the edges while you waited for something astounding to happen on screen. I was surprised at how much I really enjoyed thinking about the points the movie raised, and how much sunk in while my attention was diverted - a bit like Will Salas' explanation of his father's "fighting" style. I was also surprised by just how well the lifecounter special effects were pulled off. It was, indeed, brilliantly done, if somewhat annoying to have no explanation for the 'how' of the lifecounters. Typical geek, I wanted the engineering notes behind that bit if nothing else! The movie is good, very good... really good even. But it just didn't quite make it up to "great" - though I fully expect it to join Niccol's other works as another "quiet cult classic".

Score: 9.8
Product reviews for listing 3739: March of the Dinosaurs -  Topic: Dinosaurs in the Artic

This incredible story is seen through the eyes of one of the most vulnerable members of the herd, a young ... more...