Home > Categories > Books > Kids - General > How does the Giraffe get to Work? review

ProdID: 5758 - How does the Giraffe get to Work?
Author: Christopher Llewelyn & Scott Tulloch 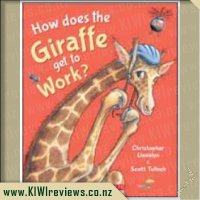 How does the Giraffe get to Work? product reviews

After a long day's work at the zoo, the animals all head back to their respective homes, making their way back to the zoo the following morning, just like the rest of us do! Some ride public transport, some take a jog, some hitch a ride and tough tiger revs his moped, each tackling the morning commute as grown-up people often do. But where is Giraffe, Will he clock in on time?

We were super lucky to be given this fantastic book to review and this has turned out to be a favourite for not only for my own daughter (only 13months but an avid book reader already) and also the children I teach (that is, around 50 two to five year olds). All of the adults and children who have read this book over the last week since I received it have thoroughly enjoyed the tale it tells.

A funny book which explores what might take place if animals worked at the zoo, arriving in the morning like the rest of the staff instead of living in their cages - this book sure has captured the heart of all the children I've read it to. The author has done a great job of writing this story and there is lots of rhyme included throughout - something which I find always helps to capture a young child's mind.

The illustrator has also done a wonderful job of the beautiful pictures throughout this book! The pictures are bright and colourful, definitely eye catching but at the same time I really appreciate how the animals are kept very real looking. I think this is really important for children to see an animal as it actually exists. I think this is part of the reason that my daughter (13months old) really loved this book - she is really interested in animals and will point to her favourite animals and tries to make animal noises to. I know she is probably considered "too young" for this book, but as I have always exposed her to lots of literature this book is no exception. Of course I am with her to ensure the book isn't damaged, and often I can't finish reading a page before she is turning it to discover the next one. Still, she goes to the shelf and points to this book every night before bed at the moment (and she wont settle for another book either). That to me says a lot!

I have also found that the more times I read this book and look at the pictures the more I notice about different little things that are included in the pictures. The children I work with and have read this book to have been a huge part of this - each n every day they are pointing out new things to me. I think this book has really got some of our older children thinking about things and they have been asking lots of questions. I guess pondering... well maybe animals do go home when the zoo closes. It fits in nicely with the theory that we live at pre school to! (Something which most children explore at some stage - we certainly have a few at the moment

Overall a fantastic children's book that I am already thinking of to use for future presents for nieces and nephews. Fully recommend this book - you wont be disappointed!

We were lucky enough to be given this book to review and miss just-turned-6 seems to be at a great age to really enjoy and appreciate it.

This book is a humorous account of how things might happen if animals only worked at the zoo and went home at night time. And it's all told in clever rhyme which I love in children's books. There are a few big words in this book, along with names of animals which were new to my daughter. The pictures are great and all in all I found it a great way to discuss the new words, point out what the different animals looked like and so on. Actually there were a few words I wasn't sure on either, so we decided we could look them up together...so a fun book, but educational also.

My daughter really took to this book straight away - and particularly liked the punchline of the last page - how the giraffe got to work. She later recounted it to her Dad and couldn't wait until the end of the book to tell him what the giraffe does! It's funny the things that appeal to a child.

Despite the words she doesn't know, she also likes to read this book to herself - a sign of a book that has captured her interest. All in all a great book to have in our collection with some definite re readability.

I was lucky enough to win this book through Scholastic's Facebook page, that was very exciting indeed. TeAriki, 2, was excited to open the "package"

I love the illustrations that are very well done and lot's of fun. The whole book is fun! The three children all thoroughly enjoyed it, aged 8, 6 and 2. It is an easy enough book that Miss 8 can read it to her baby brother but still fun for the whole family.

It has become Mr 2's favourite book and I have read it about a thousand times. The book has lots of rhymes and silly things to make you laugh. I love stories like this that make the kid's ask questions and engage in conversations after reading, which the older two did. They were intrigued by the idea that perhaps the animals do go home when the Zoo closes and creating scenarios from the book like imaging they were on a train with a bunch of baboon's!

This is a great book for families of young children and I would not hesitate to recommend it, it is a great way to lighten up grumpy moods and an enjoyable way to say Good Night. Five star's here, we love it!