ProdID: 3197 - Daughter of Smoke and Bone
Written by Laini Taylor 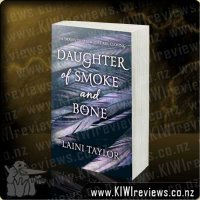 The note was on vellum, pierced by the talons of the almost-crow that delivered it. Karou read the message. 'He never says please', she sighed, but she gathered up her things.

When Brimstone called, she always came.

In general, Karou has managed to keep her two lives in balance. On the one hand, she's a seventeen-year-old art student in Prague; on the other, errand-girl to a monstrous creature who is the closest thing she has to family. Raised half in our world, half in 'Elsewhere', she has never understood Brimstone's dark work - buying teeth from hunters and murderers - nor how she came into his keeping. She is a secret even to herself, plagued by the sensation that she isn't whole.

Now the doors to Elsewhere are closing, and Karou must choose between the safety of her human life and the dangers of a war-ravaged world that may hold the answers she has always sought.

"Once upon a time an angel and a devil fell in love.  It did not end well". That foreword describes the book perfectly.

AROUND THE WORLD, black handprints are appearing on doorways, scorched there by winged strangers who have crept through a slit in the sky.

In a dark and dusty shop, a devil's supply of human teeth has grown dangerously low. And in the tangled lanes of Prague, a young art student is about to be caught up in a brutal otherwordly war.

MEET KAROU. She fills her sketchbooks with monsters that may or may not be real she's prone to disappearing on mysterious errands, she speaks many languages not all of them human and her bright blue hair actually grows out of her head that colour. Who is she? That is the question that haunts her, and she's about to find out.

When one of the strangers, beautiful, haunted Akiva fixes his fire-colored eyes on her in an alley in Marrakesh, the result is blood and starlight, secrets unveiled, and a star-crossed love whose roots drink deep of a violent past. But will Karou live to regret learning the truth about herself?

This book was one of those that is very hard to put down, I would sit up at night just to read more.  I even woke up one morning with it in my hands and the light on.  It is very hard to describe exactly what kind of book it is, there is romance, danger, touches of laughter.  It is set in the present, so it is a world most of us can relate to.  That is until the angels start flying, fighting and falling in love.  I am not going to talk about the doors and the teeth, as you will need to find out about them yourself.

The second book in the series is going to be published later on this year, plus a movie of the first book is in the planning stages.   I cannot say how much I loved this book, it was one where I could here all the characters talk, I could feel their emotions & in my head see what was happening.  Everyone that has read this book has loved it and I know you will as well.

Score: 10.0
Product reviews for listing 1569: The Tide Lords #2 - The Gods Of Amyrantha -  Written by Jennifer Fallon

Things are not going so smoothly for Declan Hawkes, the King's Spymaster, either, and not just because the Empress of the ... more...