Home > Categories > Books > Fantasy > The Kingkiller Chronicle : Day One : The Name of the Wind review

« The Cat with No Name review

ProdID: 2136 - The Kingkiller Chronicle : Day One : The Name of the Wind -  Written by Patrick Rothfuss 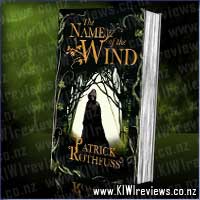 Disclosure StatementFULL DISCLOSURE: A number of units of this product have, at some time, been supplied to KIWIreviews by Hachette or their agents for the purposes of unbiased, independent reviews. No fee was accepted by KIWIreviews or the reviewers themselves - these are genuine, unpaid consumer reviews.

The Kingkiller Chronicle : Day One : The Name of the Wind product reviews

The riveting first-person narrative of a young man who grows to be the most notorious magician his world has ever seen.

From his childhood in a troupe of traveling players, to years spent as a near-feral orphan in a crime-ridden city, to his daringly brazen yet successful bid to enter a legendary school of magic, "The Name of the Wind" is a masterpiece that transports readers into the body and mind of a wizard.

It is a high-action novel written with a poet's hand, a powerful coming-of-age story of a magically gifted young man, told through his eyes: to read this book is to be the hero.

Despite the apparent similarities to another well known orphan magician (by the incredibly original name of Harry Potter), the experience of reading the 'Name of the Wind' was completely different. Darker, older and much more serious. One of the best things about this story is it's incredible realism. Magic is just like physics with specific rules. As I was reading, I found myself trying to work out what ingenious way he would think to link the elements around him together to get out of the fix he'd inevitably found himself in.

Having said that, it did take me a while to get immersed into the world Ruthfuss had created. I am a bit biased. I find reading stories with zero female characters inside the first 53 pages a little difficult to identify with, especially when the men are all very angsty and violent. Still, by page 54, young Kvothe had suddenly appeared and charmed me the rest of the way through the story.

The world is immense and yet fully managable. The names are easy to read (mostly) and I came away trying to practice some of the mental exercises that Kvothe had been given in the university, just to see if I could do them (I couldn't... my brain obviously isn't insane enough).

I am not sure if I want to read the other two in this series, the main character ends up too depressed and I am not morbid enough to want to know why (actually, I have a sneaky suspicion his girlfriend will die and I hate when that happens). But if you like high action and fantasy worlds that actually make sense, and bad guys that are intriguing and more than worthy of their inevitable defeat, this book should be high on your 'to read' list.

Score: 9.5
Product reviews for listing 825: The Wheel of Time : Knife of Dreams -  Written by Robert Jordan

The Wheel of Time has captivated a generation of readers, becoming an international bestseller. Now RObert Jordan brings us the thrilling penultimate volume in this ground-breaking fantasy epic.

As the very fabric of reality wears thin all portents indicate that Tarmon Gai'don, the last battle, is imminent - and Rand al'Thor must ready himself to confront the Dark One. But first Rand must first negotiate a truce with the Seanchan ... more...