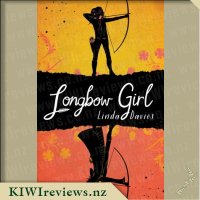 Disclosure StatementFULL DISCLOSURE: A number of units of this product have, at some time, been supplied to KIWIreviews by Scholastic (NZ) or their agents for the purposes of unbiased, independent reviews. No fee was accepted by KIWIreviews or the reviewers themselves - these are genuine, unpaid consumer reviews.
Available:
December 2015

A stunningly exciting and dramatic story set in the wilds of the Welsh mountains, where the brave and beautiful Merry Owen, the Longbowgirl, travels back in time to the autocratic kingdom of King Henry VIII to save her ancestors.

Steeped in history, ancient lore and crackling with tension between the central characters Merry and James, Longbow Girl explores the themes of who we are and who we can become when fighting for those we love and for our very lives. Are we prisoners of our history or can we break free? Can we become all that we need to be to meet the ultimate challenge of life and death in the King's Tournament and in the dungeons of the Black Castle?

This book is an absolute delight. The author has taken a simple adventure story about rivalry and revenge and has honed it into a beautiful work of fantasy interlaced with real historical events and geographical settings. As I read on, I started to think that this was in effect a fairy tale and I have to admit that I read it at one sitting - I just could not put it down. It made for compelling reading.

Although it is clearly a work of fiction, the main characters are entirely credible. The fluency of the narrative is so effective that I found myself mimicking some of the actions - walking on the outer edges of my feet and rolling them forward so as to creep up on someone and take them by surprise, or holding my breath to see how long I would last under water if I ever happened to be trapped in an underground river. In fact, who knows when these talents could come in handy?

There is much attention paid to minor details. The excavation is carried out scientifically so that any artefacts or bones unearthed will not be damaged. Museum quality gloves are used when an ancient manuscript is handled. And the method of discharging an arrow from a bow is described several times over so that I ended up actually wanting to try it for myself. Real historical characters such as Henry VIII are described vividly and are woven into the story so that their interactions might be something that actually happened in their lifetime.

There are several thematic strands which make reading the book such a rewarding experience. Ambition and belief in yourself are possibly the most important. One of the two main characters is a strong young woman (Merry) who epitomises everything a girl can aspire to be. She is talented, fearless, loyal and feisty. Her physical handicap has never stopped her from doing whatever she chooses. In this way she is a great role-model for other young people who have to live with disability and refuse to let it get in their way.

The other main character (James) is a young man who is trying to break free from the career his family has mapped out for him in order to pursue his own dreams. He realises that being true to yourself is far more important than just thinking about living in luxury and drifting into a life that somebody else has chosen for you.

Another major theme is that of dedication to what you really want to achieve. Both Merry and James excel at their chosen sports, archery and football, and they recognise the importance of constant practice and aiming for perfection. This is a great message for readers who may think that you have to be born a top achiever. It reinforces that perfection comes through practice and is not something anyone can reach without making an effort. At the same time, anyone can achieve anything if they work at it long enough. There are no limits!

Loyalty is also a major theme. Merry and James are both loyal to their families and are committed to protecting them wherever and whenever they might be. It is a source of conflict for James when he has to carry out what might be seen as a betrayal of his family in order to ensure that justice is done. Again, the message to the reader is that it is only by being true to yourself and your own values that you are being honest with those you love.

I think this is one of those novels that will reach far beyond the intended audience of young adults. Many others, both older and younger, will enjoy reading it for the fast paced storyline and the fine prose. Certainly I plan to read it again, and will be recommending it to others as well.

Demons are beginning to materialize without warning on Earth. If humans were to capture one, all fairies would be exposed. In order to protect themselves, the fairies must decipher complicated equations to determine where the next demon will appear. Not even the brilliant Foaly can make heads or tails of the formulas - but he knows someone who can: Artemis Fowl.
When a very confused demon imp appears in a Sicilian theater, Artemis is there ... more...