The Hunger Games - The Ballad of Songbirds and Snakes review 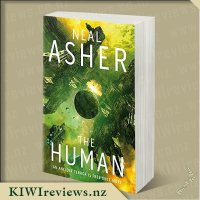 Disclosure StatementFULL DISCLOSURE: A number of units of this product have, at some time, been supplied to KIWIreviews by Macmillan Publishers Ltd or their agents for the purposes of unbiased, independent reviews. No fee was accepted by KIWIreviews or the reviewers themselves - these are genuine, unpaid consumer reviews.
Available:
via online stores and retail outlets

Rise of the Jain 3 - The Human product reviews

Both humanity and the Prador thought their ancient foe - the Jain - had perished in a past age, and they resolve to destroy these outliers at any cost. Orlandine wants the Client's inside knowledge to act, but the Client has her own agenda. Earth Central, therefore, looks to the Prador for an alliance, after the Jain destroy their fleet.

As the Jain warship makes its way across the galaxy, it seems unstoppable. Human and Prador forces alike struggle to withstand its devastating weaponry. Orlandine's life work is to neutralize Jain technology, so if she can't triumph, no one can. But will she become what she's vowed to destroy?

To try and explain the parts of this book that hit me the hardest, without drowning it in spoilers, is not easy. I will say though that the promo blurb (above) reads quite differently to the overall context of the story. This 'final' moment of the Jain has more than enough twists to keep you guessing how the story is going to progress next.

The revelation relating to the Jain is, to say the least, stunningly handled. All the threads tie together so nicely, and there are a number of 'Huh!" moments throughout that explain so much, it's not only a gripping tale, it's a delight to read. While in theory you could read this a chapter at a time without losing the story, attempting to put the book down after only reading a chapter is not always successful. A '10 minute reading break' somehow became a 3 hour 'lost somewhere out past a gas giant on fire' break that resulted in numb feet from bad seating posture. I discovered that last bit the hard way.

The evolution of Orlandine is a full cycle of irony, and while totally different from Captain Trike's journey, they oddly mirror each other before coming together in the most unexpected way. What comes out the other side is not what went into the clash in the first place, so I foresee many familiar names being different people in coming tales. I fully expected there to be a major loss of a key player or two, so was surprised by the final body count. Neal, as usual, played the fine edge of balancing overall storyline progress and personal warfront stories that develop big players in Neal's longer worlds.

The development between the Client and the combined Polity/Prador fleets, and then the cataclysmic confrontation between the Jain warship and basically everything else that survived... whew, that was a helluva fight scene and had me on the edge of my seat the whole time. The aftermath of that battle is the perfect launching point for another trilogy, which I hope is in the pipeline.

As well as expanding on the ultimate nature of, and the deeper connections between the ancient Jain warship, the Librarian and the Client, this story also develops the relationship between Earth Central - as the putative leader of the Polity - and the King of the Prador in his current expanded state of being. Revealing more of the 'big picture deals' that grease the wheels of interspecies politics on a literally galactic scale.

Overall, this was a thrilling and thoroughly enjoyable read that took me right into the dark heart of the true nature of the Jain, and dragged me down to join the fight. Once I got the time to start reading, I didn't want to stop. The culmination of this story arc, it's a perfect prelude to something longer down the timeline, because the races as they stand in Neal's universe work on stellar timescales. We've had the Atheter, now the Jain is covered... so really hoping it's time for the Csorians soon.