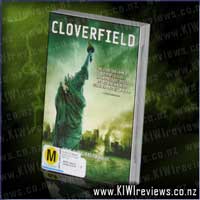 A group of friends throw a party for Rob, who is leaving New York to go and work in Japan. As the party progresses, however, violent shakes and explosions herald the arrival of an unknown creature, which begins its rampage by throwing the head of the Statue of Liberty down into a street.

Told from the viewfinder of their video camera, Cloverfield shows how Rob and his friends venture deep into the streets of New York, avoiding the giant creature however possible, determined to rescue Rob's true love from her destroyed apartment building in midtown.

This movie proved almost to difficult to finish. Simply put, if you don't like shaky cam, then I wouldn't bother watching this. The entire thing is professionally shot to look like someone has filmed it with a handheld camcorder. In my opinion it really ruins the film for me. I don't see anything, the constant movements almost gave me a migraine, and hearing so much up-close screaming, it was not enjoyable.

This style of film worked for the 'Blair Witch Project' mainly because they actually used a cheap hand-held camcorder all the way through, and secondly, you couldn't see anything anyway. It was meant to scare you because it is a scenario that you could be in one day, and if you enjoy camping, then you would probably reconsider it for a fair time afterwards.

Cloverfield, however, is not a realistic scenario. It is out of this world, and thus isn't going to horrify or thrill anyone. As an attempt at creating an American version of Japan's Godzilla, I fail to see why they would even attempt to make the creature similar in any manner. An original monster would have been far more appropriate.

This movie was a pure loss in my opinion. I would rather watch the cheesy original Godzilla movies.

Like 'Godzilla' meets 'War of the Worlds', done in 'Blair Witch Project' style, this movie is something of an acquired taste. Believe it or not, the monster doesn't really seem to be the key plot of the story, this is basically a mid-apocalypse love story. Rob and Beth were best friends who became lovers. This is clearly shown by the bits of tape revealed during the movie as Hud, best-mate to Rob, stuffs around with the camcorder he has been handed to film Rob's farewell party. Of course no-one told him to swap out the tape containing Rob's treasured memories of a wonderful day with Beth almost a month previous to the 'Monster Mash', but because of this we get some glimpses into the reasons why Rob does a whole pile of stupidly dangerous things to save her. More than a few of his mates lose their lives to pay the blood-price of his quest.
There are a lot of little details hidden in the segments of past-taped, such as hidden images, key plot elements that dont really make much sense until you look at a bigger view of the story, etc. One of the key elements that explains how it all started is actually shown right at the end (HINT: It's a lovely view of the ocean from the top of a ferris wheel) but you'll need a keen eye or a habit of hunting around online before you watch the movie to really spot them the first time around. Took me 3 viewings AND some online digging to find out the majority of them and I still get the feeling I missed some.
Probably not the best movie for kids, this one is M-rated for a reason. There are some pretty stunning special effects scenes, including a few 'people getting eaten in close-up, Mr DeMille' which arent actually gorey but pretty nightmare-making if you are squeemish and have a good imagination. The views we get of the creature are pretty stunning, and the little baby aliens are downright NASTY! (They actually remind me a lot of the 'Sammaels' from Hellboy because no matter how many die, there always seem to be a few hundred more, they are fast, can climb along any surface, and are just plain vicious!)
All in all a pretty good movie. Really took me by surprise as I was expecting a lame movie no better than a polished 1950's era Godzilla 'Grr! Look at me, a big nasty monster rampaging through New York! Snarl. Grr, even." movie. Worth a look at the very least.