« The Chronicles of Aden Weaver - 2 - The Sasori Empire review

The Man On The Island review

ProdID: 8760 - The Chronicles of Aden Weaver - 3 - The Last Tree
Written by Yvette Carol 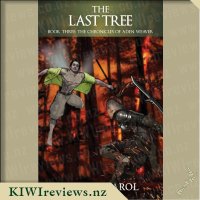 The Chronicles of Aden Weaver - 3 - The Last Tree product reviews

After nearly losing their lives, thirteen-year-old Aden Weaver and his team continue to chase the legendary Or'in of Tane. The Sasori smuggle the stone across the Land of Fire and Ice. The stakes rise when a revolution breaks out and threatens the habitat of the bird demons, the Tengu. The war threatens the ecology of the planet.

It's no longer just about the relic or the Lost Island, but the survival of the entire world. To win everything from nothing, Aden enters a dangerous game with the Tengu horde. With a slave girl to rescue, mythical demons afoot, and the warlike Loci joining the battle for the Or'in of Tane, Aden must stay one step ahead in the game of his life.

Of the three books in the trilogy, this one is by far our favourite. My friend's 12-year-old and I read all three books and compared notes at the end of each one, and we were in complete agreement on this. What made it stand out was the inclusion of the map at the start which made tracking Aden's journey much easier. The other useful item was the List of Characters at the end. I only wish the list had been included in the first book of the series because I would really have liked to be able to refer to it from the start. I actually started my own list when I was halfway through Book 1 because I kept forgetting which insect family the various characters belonged to. Best of all would be to include it in all three volumes.

But other than that, the story itself was faster paced. I read it in one sitting because I could not put it down; Mr 12 read it over three days, but as he said, school kept interfering with his reading time! He reinforced my impression, that this book is altogether a faster read; the loose ends are finally tied up, and there is a good traditional ending! There is also a timely message about environmental issues and ecological balance, so relevant these days when climate change and conservation are hot topics.

Running through this book is the strong theme of mercy. Various characters let their friends down at different times, but the hero, Aden Weaver, is ready to accept that people can change and may be deserving of another chance. Although revenge and payback are also threads that are prominent in the narrative, they are tempered by justice and common sense. Certain world leaders could learn from some of Carol's young characters who turn out to be wise beyond their years.

Mr 12's favourite characters were the centipedes. He was fascinated by the way they could work together to move a badly injured Pums to Windfall, where Queen Nerida would be able to heal him. His school Drama class has done a similar trust exercise, where several students lie side by side on the floor, lift another student above them, and then pass him to the other end of the row using only their hands to move him along. From now on, according to him, this exercise will be known as the Centipede!

I am looking forward to sharing this series with Mr 10 now that Mr 12 has finished reading it. Although two years younger, Mr 10 is an accelerate reader and, like Mr 12, he loves fantasy fiction as well as sci-fi so Aden Weaver's adventures are bound to appeal to him. I am also interested to see if he can work out whether or not the series is set in the modern day. The technology used (remote controls, tiny surveillance robots, etc) would imply that this is a modern story set in a parallel world, but in Book 2 Aden's birth record indicates that he was born in 1821. There again, in a parallel world, perhaps details like this do not need to match up!

Down in a gully on a farm far away,
a clan of kiwi put on a dance display,
invited friends to join, one sunny day,
to do the Hokey Tokey, and here's how to play...

New Zealand animals of all shapes and sizes come together to do the Kiwi Hokey Tokey.