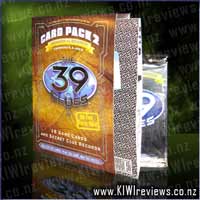 This card pack is for books 4, 5 and 6 in the series, and introduces a range of exciting new ways to use them, including "Branch vs Branch", "Combining Cards" and the ability to trade "Card Replicator" cards for missing clue cards.

Once again scholastic have found a way to take an old idea and make it good and enjoyable for young and old.

The new features implemented in this the 2nd Card pack of the series has just expanded the game playing experience by a country mile, the combo system is a well thought out addition and the replicator cards are an even better idea as it will help my son get a card he has trouble getting as time goes on, so great stuff.

Good one Scholastic you are really onto a winner here.

The hunt for the 39 Clues scattered around the globe is now bigger, better and the stakes are even higher. Card pack two contains never-before-seen game cards and top secret clue records that have secret messages hidden inside, and it's up to you to solve them. The cover almost looked like Beyond The Grave, except it was a different colour and it had a broken statue of Sakhet, not the pictures on the card pack. I think the pictures in the clue records looked cool, however the secret messages were just as difficult as all the other codes I have cracked. See you on the hunt.

I love this series of cards and the new features added in. It has been a lot of fun sitting down with the younger members of the family pulling the packs apart and discovering all the new clues, puzzles and stunningly clever artwork. Probably the only card we have discovered so far that I find frustrating and highly unfair is Card #135 because it is one of those annoying and mostly-impossible 3d stereogram things. The ones that look like static until you cross your eyes in a special way and suddenly a 3d shape pops out. Tottally unfair to those of us whos eyes refuse to do anything other than focus properly on things.
I am impressed at the "card combo" feature, where if you collect the right series of cards that share a common theme or mini storyline, they combine to unlock another clue. Some of them won't unluck until certain 'missions' have been completed, which adds another dimension that even s the playing field for those who can't afford to go out and buy a few hundred card packs so that they have all the cards right at the outset.
All in all this is quite possibly the coolest collectable card game I have seen in many years. Because of the unique single-shot codes, the cards are utterly worthless to schoolyard bullies and thierves once they have been entered into the website, but the artwork is amazing.

I really love this whole series and this pack is a definite improvement on the last one. The included guidebook now has a list of the possible cards and what they are (including rarity) and the website upgrade makes exploring your collection and putting together your combos a much more enjoyable experience.

The coolest thing by far is the addition of the 'replicator cards' (now available in all the card packs) which allows you to get cards you have been having real difficulty finding. You seem to get one per pack which means that if you have all the cards in the first set bar one, you don't have to go out and spend another $10 in the hope that you --might-- find the one you were looking for.

Great for children and adults who never quite grew up (like me)!

I am a great fan of this whole series and have been since it first came out. Having also had my time as a 'collectable card game' buff, this aspect of the series really appealed to me.

The artwork is still as impressive, if not more so, and the added features make them so much more playable! The ability to create combos and combine cards to reveal bonus info and unlock extra clues is brilliant, as is the fact that if enough care is taken to study them, there is often links that close gaps created by cards you don't yet own. And with a total of *7* new clues to be unlocked by this series of cards, it's worth getting them! (Though combo-capable cards are marked with a Combo Key symbol to let you know which combo-set they are part of, you should also look out for the special unmarked card that uses cards from Series 1 to unlock a hidden combo clue!)

Of particular note is the ability to now use the 'card replicator' cards to create virtual copies of missing cards, thus making for a slightly less expensive way to complete the game and gather clues... although you need to be aware that there are some limitations to this process.

If a card you are missing is part of a combo, you will see a 'locked card' placeholder image in the combo page. By clicking on that locked card, you are presented with the option to use replicators to 'create' the missing card... however, if the missing card is *not* part of a combo, you have no way to 'select' it, and thus are not given the opportunity to replicate it into your online set. A bit of a downside there, but still... I am sure the brainboxes at Scholastic will find a way around that eventually. Also of note is that it takes 1 Replicator to 'create' a Common or Uncommon card, and 3 Replicators to 'create' a Rare or Ultra-Rare card.

Overall, an excellent addition and upgrade. These new cards will be great fun for my son and I to use when we play "Doublecross" now that we have printed off our game mats, available from the official website. ;)

Bent on Humankind's extermination, a powerful fellowship of alien races known as the Covenant is wiping out Earth's fledgling interstellar empire. You and the other surviving defenders of a devastated colony-world make a desperate attempt to lure the enemy fleet away from Earth. Shot down and marooned ... more...