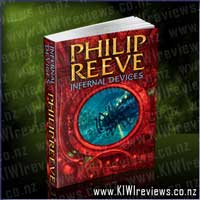 Disclosure StatementFULL DISCLOSURE: A number of units of this product have, at some time, been supplied to KIWIreviews by Scholastic (NZ) or their agents for the purposes of unbiased, independent reviews. No fee was accepted by KIWIreviews or the reviewers themselves - these are genuine, unpaid consumer reviews.
Available:
at quality booksellers

Anchorage has become a static settlement on the shores of the Dead Continent, and its inhabitants have been living peacefully for sixteen years. But now trouble is approaching - in a limpet sub, and fast. The Lost Boys are back, and they'll do anything to get what they want.

Tom and Hester's daughter, Wren, is their eager dupe, bored and desperate for adventure. When the theft of the mysterious Tin Book of Anchorage goes wrong, Wren is snatched away in the limpet, who knows where.

Tom and Hester set off to rescue her, but this is the end of their quiet life on Anchorage. The journey will stir up old needs, old secrets - and send them back into perilous waters...

My first thought, in trying to sum up this story, is 'solid'. Everyone is here, from Shrike, the stalker-with-a-heart, to Gargle, the lost boy who saved Caul in the previous story (though his appearance is surprisingly brief). Tying them all together is the mysterious Tin Book, which young Wren steals in exchange for an Adventure...

I think the main down side to this story is that all of the characters seem to be going through their 'low' moment at the same time, making reading slow and somewhat agonizing in places. Especially when Hester turns up - that woman is surprisingly cruel and cold hearted and one can't help but feel that she doesn't deserve Tom. Wren, the central character, also lacked charisma and ended up sounding just like a whiney teenage girl.

Bizzarely enough, the character I liked best was Dr. Zero, a ressurection specialist for the Green Storm. Her and the resurrected stalker Shrike were the highlights of this book and I wish I they'd had more space.

Still, if you read Mortal Engines for the world and the overarching story, things are definitely picking up in pace. I do appreciate the gritty realism Reeve has created in this post-apocalyptic Earth. I do want to know whether humanity will descend into another brief, sixty minute war and wipe itself out again, or whether our heroes (annoying as some of them may be) will manage to come up with a different option, a way out of the constant war and 'Municipal Darwinism' that defines their generation.

It is hard to judge such an expansive story on a book by book basis (Harry Potter was the same), Infernal Devices has plenty of plot and character progression, but it is like the Half-Blood Prince, in the middle of going somewhere interesting, yet stubbornly refusing to get there, at least until next time. I suppose I'll just have to keep reading.

By all the Ice Gods, this story gets better each book! Characters I though had vanished are making appearances all over the place, connections undreamt of are becoming more apparent... and I swear this tale could have been just as effectively told if there were a mere 20 people left in the entire world, since they all seem to be tangled up in Fate's wicked web, destined to affect the outcome of the entire remaining world!

Once again the Lost Boys are brought into focus, and this time we finally 'meet' Uncle, the Orwellian patriarch of the Lost Boys clan. We also find out his history, and how he founded the Lost Boys and the subaquatic Burglarium. Tom and Hester are, naturally, still at the forefront, and we discover what happened to the decidedly narcissistic Professor Pennyroyal... and what a wicked sense of humour Fate has...

Wren is as Fate-touched as her parents, it seems, since a simple petty theft by her starts a chain reaction that leads to the loss of hundreds of lives, an entire floating city, and potentially a lot of damage to a conclave of traction cities as well, plus a civil war the likes of which we can easily imagine, since we see them almost daily on the news. If this isn't a prime example of "the Butterfly Effect" in action, I don't know what is.

Overall, a stunning continuation of the tale, and the penultimate in the major plot... I am rubbing my hands in glee at the chance to start on Book 4 - A Darkling Plain... as it reveals, if I am correct, a new most-devastating weapon left over from Ancient times, much like Medusa in the first book, and again it's controlled by someone quite willing to ignore the lessons of the past, and use it.

Tencendor is no more. The land is gone. But a few SunSoars still remain, and a new foe walks the world.

Ishbel Brunelle, priestess of the Serpent Coil, and Maximilian, the Lord of Elcho Falling, have raised the magic of Elcho Falling, and found new allies against the darkness in the mysterious Lealfast. And more crucially still, Axis SunSoar, former god and current hero, has rediscovered the magical Star Dance and revived his ... more...