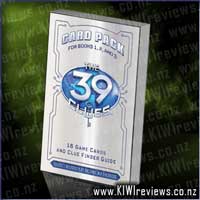 Disclosure StatementFULL DISCLOSURE: A number of units of this product have, at some time, been supplied to KIWIreviews by Scholastic (NZ) or their agents for the purposes of unbiased, independent reviews. No fee was accepted by KIWIreviews or the reviewers themselves - these are genuine, unpaid consumer reviews.
Available:
at quality retailers

These cards add a really fun element to the storytelling and help the reader feel like they are a part of the story. I refrain from using the word 'kids' here because I am twenty and also enjoy reading the story and uploading my cards to see what clues I have collected so far.

Each card has nice artwork and incorporates subtle clues that are or will be relevant to the story - and I enjoy that they keep making you think. I also like that once the card is 'activated' it is safe in your account and it doesn't matter if you accidentally lose the card or your baby brother / dog chews on it.

Definitely worth getting at least one pack with the book if you are playing the online game. It's really fun seeing the secrets unfold and learning how some of the most famous people in history (apparently) fitted together.

The hunt is on to find The 39 Clues, and these cards are one of the ways to find them. This pack contains 16 game cards with at least one rare or ultra-rare card included! These cards are only for the first three books of The 39 Clues, and yet there are 73 cards out there ready to be collected and put online. Each card pack contains a clue finder guide which will give you detailed information about The 39 Clues and what rules there are. I think the cover looks great and seems like it's pop-up. Don't turn back, the hunt continues.

My favorite cards are number 33 and 35. They are my favorites because I like the cat and his headband and because card 35 is a jewel.

I think they are cool because they are shiny like diamonds and they have cool symbols. I also think the artwork is cool.

I like using the cards online because of the extra information and the fact you don't have to cut them or draw on them.

As a child growing up my favorite thing was to collect neighbors and cabbage patch cards. I often spent my pocket money on them and asked family to buy them for me for events such as Christmas or birthdays.

The 39 Clues cards have some amazing art work even though they don't appear to be worth a lot or a huge collectors' item. The fact that you can see them larger online and find out more information about the card is really great.

They give you a lot of help with solving the clues and you are bound to get at least one ultra rare card among the pack.

I've never been a card collector (save for Top Trumps as a kid) but my daughter has been into collecting cards, swapping cards and generally building up large collections of cards, often with no apparent reason to me.

These cards are different - inasmuch as they tie in closely with the books (books 1-3 with this pack) with more cards to be released along with book 4. They appear not to be tradeable with other users or fans because of the unique number at the bottom of the card - and perhaps tradeable cards would have added an extra playground element to the fun for kids (I guess unused doubles can be traded).

These cards can be logged in on-line and used online, to prevent damage to your existing cards.

Overall, this cards add an extra dimension to the series of books, and therefore, increase the fun factor for the children and the nag factor for the parents to buy more cards. I doubt this will be a problem because there will be many parents, like myself, wanting to solve the clues and help their beloved child win the prize.

Years ago I went through a 'card collecting' phase... "Magic: The Gathering", comic cards, collectable puzzle art pieces, fan-cards etc... so I learnt a bit about what to look for, when it's all hype and when the cards look to grow in value, etc.

Looking at these cards with an experienced eye, I don't see "These'll be worth a fortune one day..." but that's to be expected really. They aren't produced for that market. Nor are they produced as part of a stand-alone game... these are parts of the puzzle that is "The 39 Clues" phenomenon. The cards aren't unique in the sense of "there are only a few of each out there", far from it... but each one carries a 1-time code that gets entered into the website to 'activate' it. Once activated, some cards contain hidden puzzles, some carry 1 of the missing 39 clues, some are just used for information only... but all the cards have a value and a use within the game. As the game progresses, they will get combined to give greater results than the singles cards can alone. Confusing? Not really... think of them as small machines... each one will perform a small, specific task... but when combined, something more can be done... you'll just have to get involved to find out exactly what.

The artwork is great, with all sorts of fun stuff... and you can view and print larger versions off the website once they are activated in your account. This comes in real handy with some of the clues, as you need to fold, cut, bend or write on them to solve the hidden clues... and it would be such a shame to destroy the cards themselves.

Each retail pack comes with 16 cards, randomly selected from a pool of about 55... though you will find cards with numbers up as high as 73 (so far) but that is all explained later in the game... it's still early days yet. Each pack is guaranteed to give you at least one Rare or Ultra rare card, and you'll probably find at least 3 ultra-common cards in there too... the rest will be a combination of commons and uncommons.

This set of card packs covers the storyline as it stands for the first three books, with a new set of cards being released alongside Book 4 sometime late 2009 or early 2010.

Overall, an excellent, but also essential, part of solving the mystery, the adventure, the phenomenon, that is "The 39 Clues".

In Red Alert 3, the desperate leadership of a doomed Soviet Union travels back in time to change history and restore the glory of Mother Russia. The time travel mission goes awry, creating an alternate timeline where technology has followed an entirely different evolution, a new superpower has been thrust on to the world stage, and World War III is raging. The Empire of the Rising Sun has risen in the East, making World War III a three-way ... more...