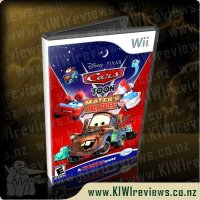 The game is a frenzied pick-up-and-play experience to be enjoyed by everyone in the room. With up to four players at once, Mania! games reward competitiveness and cooperation among players. The game will bring Mater together with Lightning McQueen and the Cars gang for a new set of adventures, capturing the endearing sense of humour of everyone's favourite tow truck.

Players will join Mater and his pals as they relive the wild stories he conjures up about hilariously unpredictable events that may or may not have taken place. The voice of everyone's favourite tow truck, Mater, will be supplied by Daniel Whitney, Larry the Cable Guy, who also voices the character in the film and cartoon shorts.

I have two young boys and they love Lightning McQueen so it seemed logical to get this game and I'm glad we did as it is easy to play, you just tilt the control, I don't get a chance to try as my sons keep telling me that they don't need any help.

The characters are based on the cars movie and the voices are familiar. I know you can chase an ambulance and boy can those suckers move and you have to aim your water hose and be a firefighter and try and put the fire out, but the fire is tricky and keeps relighting itself. You can also race and do laps. If you prefer you can follow the story and explore Radiator Springs and interact with the cars there like Doc Hudson and Mater. I think there might be some tractor tipping.

As I said even my five year old can work out how to get around the menu and the mini games so shouldn't be a problem for young kids. This game gets played a lot so highly recommended.

•  Jump right into the heart of the action with Instant Rivalry