ProdID: 6496 - Stories of an Awkward Size
Edited by Jonathan Swords-Holdsworth 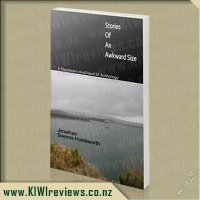 I am, and have been as far back as I can remember, a fan of sci-fi... and the heavier on the 'sci' it is, the more I love it. For me, it's not just the "what" that draws me in, it's also the "how" and in some cases the "why"... and many authors who don't research their material fail to really cover those, instead glossing over them with a blithe assumption that "it's so commonplace in the era of my stories that everyone just takes it for granted... so why shouldn't the reader?"

Not this little black duck! I want to know the ins and outs, the nitty-gritty of how that super-advanced hyperspace engine does it's voodoo... I want to know how exactly that singularity generator avoids being sucked into a black hole of its own making, how that flying thing flies without some form of reaction engine, etc. For me, if an author can't give me even a half-baked explanation, then they are not my kind of author... the stories just feel... hollow.

So, after chatting with the author online for a while to gauge his technobabble skills, and in the face of my usual reluctance to take on eBooks for review, I dived in. Suffice to say, it was a mistake for me to take the eBook reader into the loo with me. As the only time I can spare to just sit and not do productive work, those are the only opportunities I have to read these days. However the stories were varied, captivating, enthralling and quite immersive in one notable case... and it was not uncommon for my legs to fall asleep because I sat reading too long and lost circulation, and sensation. This, naturally, made for some "hilarious" antics when I attempted to stand and depart the room.

As for the stories themselves - well, without doing a huge "spoiler" section, there's little I can say... though I will point out that in one case - "Come Silent Winged Sleep", which is one of the longer stories - this is less fiction and more forecast. Jonathan may have written this one a while ago, but it reads more like a near-future truth than a far-future fiction. I am simultaneously in awe, and afraid, because I can easily see this one on the news in 5-10 years time, tops!

All of the stories have their appeals, but naturally because everyone has their own reactions to every story, there has to a favourite (the aforementioned "Come Silent Winged Sleep" for me), and a least-favourite, and for me that was Mr Devries Red Bowler Hat, because while I found the premise to be quite fascinating, the story itself didn't resonate with me as much as the others. I claim it as my "least favourite" because to say it was the worst would be to do it a great injustice. It was, in its own right, a brilliant thought-experiment and one that could give a few mindful people the creeping jeebies about how a potential version of afterlife might work.

Overall, quite an eclectic, but highly enjoyable collection, and I look forward to seeing Book 2 in the series... whenever.

Some things you should know about me:
I get into a little trouble once in a while
Okay, a lot of trouble. More than once in a while
Sometimes it's my own fault
BUT SOMETIMES IT'S NOT!

And now I'm being sent back to Hills Village Middle School, the scene of the worst year of my life.

But before that, I need to pass the toughest test EVER. It;s time to save Rafe!