Finnigan and the Pirates review 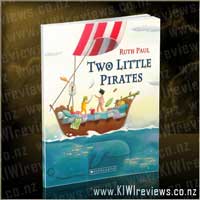 Disclosure StatementFULL DISCLOSURE: A number of units of this product have, at some time, been supplied to KIWIreviews by Scholastic (NZ) or their agents for the purposes of unbiased, independent reviews. No fee was accepted by KIWIreviews or the reviewers themselves - these are genuine, unpaid consumer reviews.
Available:
May 2010

"The dawn slips in on a dragonfly's wing, in through a porthole to wake up the King, and in through the misty remains of the night, come two little pirates preparing to fight."

Mum and Dad (the Queen and King) are woken one weekend morning by their two young boys, pretending to be pirates.

I read this book the other day at the library. My daughter quite likes picture books about pirates so I thought it would be a winner. What drew me to the book initially, was the cover art. I liked the look of the bed boat and the striking red and white sail. The kids on the boat dressed up as pirates made me smile. I sat down on a couch at the library with baby and my 5 year old and we read the book.

It took me a couple of pages to understand what was actually happening in the book. I didn't see the King as being Dad for example until maybe halfway through. The verses flowed nicely along with the images. I loved that we are presented with the imaginings of children in such a way, that you really suspend disbelief for a while. I really thought this was two pirates on a boat, as did my daughter. The king and queen characters come across as tyrants, and some of their demands were a bit strange.

I loved the expressions on the characters' faces, and the beautiful colours used in each illustration. The ending was gorgeous, and once I read the dedication I understood all to well the driver behind the tale. The joy of parenting indeed. A great story for a weekend morning.

I enjoyed this book because it was quite funny and younger kids would enjoy reading it as well.

I think that it could be a little bit cheaper.

Two Little Pirates is a great way to broaden children's imagination. The story is about two children who surprise their parents in the morning by pretending to be pirates and capturing the King and Queen (Mum and Dad).

The story has many twists and turns in it between the pirates and royals, and it kept my daughter's attention, which is a huge task for a 3 yr old.

The story rhymes throughout which adds extra character to the book. The page layout means there are between two and four lines of story with the rest of the page being the illustration.

The illustrations are big, bright and brilliant. They really capture the story and draw you in to it.

Matiatia Bay is the gateway to Waiheke Island. For centuries it has been the landing place for travellers in the Hauraki Gulf - from waka?to yachts, excursion steamers and commuter ferries.

Now Matiatia finds itself at a crossroads - this beautiful heritage site is also a transport hub for the island. The pressure for development is real, yet the bay's historical significance must be respected. Waiheke residents, urban planners, the ... more...