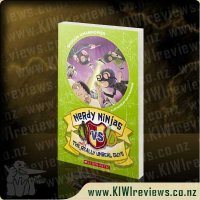 Disclosure StatementFULL DISCLOSURE: A number of units of this product have, at some time, been supplied to KIWIreviews by the company for the purposes of unbiased, independent reviews. No fee was accepted by KIWIreviews or the reviewers themselves - these are genuine, unpaid consumer reviews.
Available:
July 2013

When attempting to infiltrate a pack of wolves, a ninja is strongly advised NOT to wear a chicken suit - the Ninja Warrior's Handbook, Volume 27. Something strange is going on. Something really, really...unreal. Farmer Fetlock's cows have been wrapped in toilet paper again! But if Pongo isn't the toilet-roll-toting prankster behind the ninja cow caper, then who is? Could the culprit have come from outer space? Can the Nerdy Ninjas catch them in the act? It's a mystery. A mystery of high-jinks and high pants.

Strange things are going on and a local farmers cows have all been wrapped up in toilet paper, at first they think that it is Pongo, but once he assures them that, this time, he isn't the culprit they need to find out what is actually going on, is it something human or something a bit more.... alien...

This has some amusing parts to it and so it is a fun book. Whilst I don't find it anything greatly memorable it's a fun book that has some great 'nerd' moments to it, not only giving a good book but some good facts for the kids. Some bits had me having a little chuckle, so it was worth the nice and easy read.

I won't go out of my way to read the books in these series, if they land on my desk then I will happily read another one.

One seeks judgement, another faces damnation and one man will have his revenge...

Thorvald Spear is losing his mind as he drowns in dark memories that aren't his own. Penny Royal, rogue artificial intelligence, has linked Spear with the stored personalities of those it's murdered. And whether the AI seeks redemption or has some more sinister motive, Spear needs to destroy it. He feels the anger of the dead and shares their ... more...