There are NO MOA, e hoa review

ProdID: 9046 - Who Took the Toilet Paper?
Written by Amy Harrop 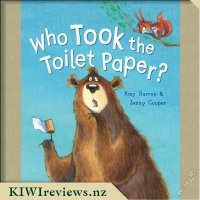 Disclosure StatementFULL DISCLOSURE: A number of units of this product have, at some time, been supplied to KIWIreviews by Scholastic (NZ) or their agents for the purposes of unbiased, independent reviews. No fee was accepted by KIWIreviews or the reviewers themselves - these are genuine, unpaid consumer reviews.
Available:
November 2022
Samples for Review:

"I've been sitting here for ages.
My rear is turning numb!
Get some toilet paper QUICK
and save my precious bum!"

Pa Bear is on the toilet in the woods and - oh no! - he discovers there's no toilet paper. The question is put out there: who is responsible for this sad state of affairs? Numerous culprits and scenarios are proposed, but when Ma hands him his long shopping list to use instead, it is plain to see "toilet paper" at the top - and it was Pa who did the shopping!

Children will adore the humour of this caught-short-with-no-paper story that many of us can identify with. The hilarious illustrations are by Jenny Cooper.

In an era when toilet paper has had a lot more airtime than in past times, it is a funny little meander towards toilet humour. I loved the language and the rhymes. It did feel a little bit Australian for me with the reference to dunny (but that might have been an easy way to rhyme funny). GrandPaw was a lovely reference to a grandparent for me which made it especially nice when you have a family with a unique grandparent name. In fact, GrandPaw was a bit of a personal favourite of mine in this story. I did also like Gram-Gram and the others too and their wonderful contributions.

The illustrations were fun and vivid and suited the light style of the story. There seemed to be tree trunks that were almost bamboo-like which made the whole story feel a bit remote to New Zealand (reminded me oddly of the Berenstein bears or a panda story). The illustrations matched the story content well and rounded out the humour of toilet paper jokes. Probably not my personal choice of stories to gift as I like a more New Zealand flavour to my stories having grown up on AA Milne rather than local children's writers so I try and keep stories local when I can. For me, as a book giver it didn't quite hit the spot as these foreign bears are not my cup of tea

but that's ok as kids the world over love them

To test this book I read it to my niece over the holidays while she stayed (Little Miss 4) and she giggled and giggled and giggled her way through it. Not sure if it was the language or the talking about toilet paper that did it for her but it was definitely a favourite over Christmas this year. The numerous uses of toilet paper were great and the ending definitely made the story stick as a favourite choice. I actually found this would have worked better as a slightly bigger hardback for us and we poured over the pictures for quite some time in some cases.

We also had to discuss other solutions to not have the issue in future (Ma Bear should have had some in the other bathroom to swap over as we do and what else the toilet paper might have been used for, mice beds were popular in our discussions!) This was a great "bedtime read for the littler ones" for me. It felt like something in tune with Gruffalo fans - which Little Miss 4 also loves

Just recently there had been a situation in our house where I had purchased a large quantity of toilet paper, however within four days it had all mysteriously disappeared, this resulted in the question "who took all the toilet paper, and where is it" It turns out the kids had been using it for their creations. While browsing the KIWIreviews site I noticed a book immediately that caught my eye, its title is aptly named 'Who Took the Toilet Paper', and I thought to myself that book is highly appropriate after the circumstances hehe.

When we started to get ready to read the book the children found the image of the bear holding the empty toilet roll very funny. Upon opening the first page we noticed that this story is in the style of rhyming, this makes it fun to read and easy to keep attention. As we progressed through the book, we got to see the dilemma of the toilet paper that Pa Bear was facing, he was stuck on the loo, and you guessed it ran out of the important paper. Through the book we get to meet Pa Bear's family and see the various ways they may have used all the toilet paper. My youngest son thought that the using toilet paper to make a giant snowstorm or to trap villains was the best. I loved the theory that the squirrels took the cardboard tubes for their nuts.

The story flows well and finding out what happened to the toilet paper was a funny twist to the plot. The children said that was not the ending that they would have thought of. This story is a fun book to read, and I would recommend for all young children. 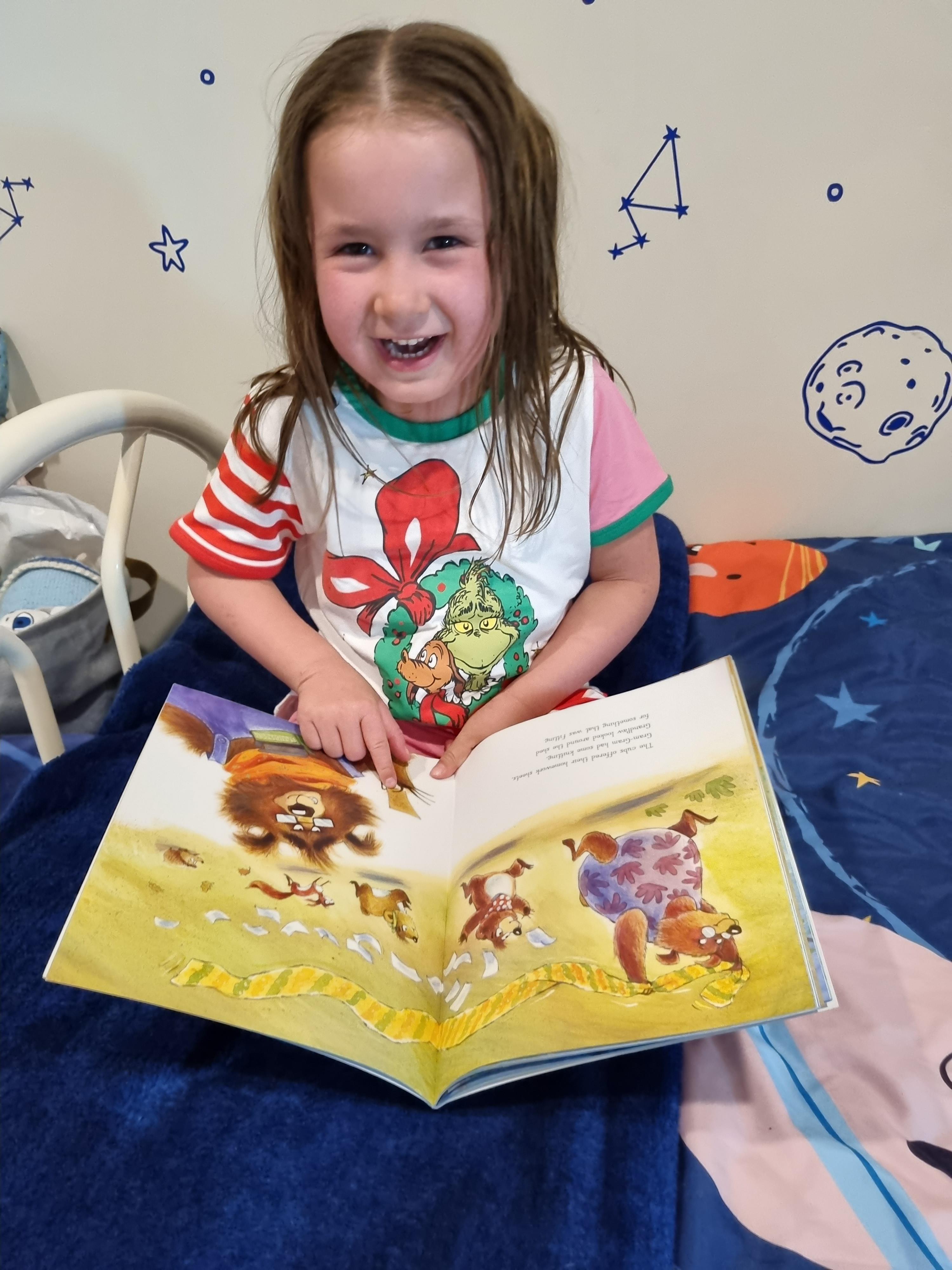 Miss Five and her parents have come to the conclusion that this is the funniest book they have ever read! Running out of toilet paper is something that happens in every household sooner or later, but these days pretty well everyone has an inside toilet, not a long drop in the bush! Not only did the hilarious toilet arrangements make Miss Five burst into giggles, but the way Pa Bear blamed everybody but himself for not replacing the toilet roll caused her parents to laugh as well.

Some of the creative solutions to Pa Bear's problem were just as amusing. Miss Five thought the idea of using sandpaper on his bottom was quite impossible - it would hurt. Using the cubs' homework or Gram-Gram's knitting were just as far-fetched. At one stage it was suggested that he could use some big leaves, but even that could be problematic if they were from a stinging nettle or a moth plant. Ouch!

Something that Miss Five found really useful was the way the story was structured in verse. She quickly picked up the main elements of the text, joining in with the last word in each verse. It was also encouraging, from her parents' point of view, that some of the words extended her: ablution, agitation, and partial are not words that would normally appear in books for children her age. Because of the context in which they were used she was able to understand them, and can now use them with confidence.

Mr Four loved the illustrations and had fun thinking of other things Pa Bear could have used to wipe his "precious bum". Some were quite unsuitable, and he had to be assured that they could not work as a substitute. He has a good imagination, so when his suggestions were rejected, he came up with the alternative solution that perhaps Pa Bear should buy extra the next time he went shopping, and the spare rolls could be stored somewhere safe. A much better idea.

The children's mother felt that the book might have been better published as a hardback as she can see it being well read over the coming years. Both Miss Five and Mr Four treat their books with respect and keep them in good condition as far as they are able, but accidents do happen. A stronger cover would help to keep the pages flat and save them from unexpected damage. Apart from that, however, the whole family was delighted with the book. From the fun story to the delightful illustrations, this was a book that appealed to all of them.

If Alex and Ren are going to stop the Death Walkers, they know they have to find the powerful Lost Spells. So they head to the Valley of the Kings, deep in the Egyptian desert -- where they discover that Egypt is in the grips of madness. Voices in the air whisper dark secrets and flashes of light burn across the night sky.

But their hunt for the Spells keeps getting sabotaged. Every step they take, The Order is hot on their trail. ... more...