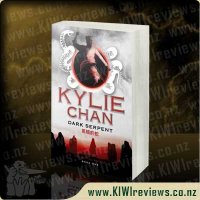 Disclosure StatementFULL DISCLOSURE: A number of units of this product have, at some time, been supplied to KIWIreviews by HarperCollins or their agents for the purposes of unbiased, independent reviews. No fee was accepted by KIWIreviews or the reviewers themselves - these are genuine, unpaid consumer reviews.
Available:
May 2013

When the Ancestry of Xuan Wu's fiancee, Emma, is revealed, it threatens the harmony of the whole Celestial realm. The demons are gathering, powerful alliances are being made and stone Shen are under threat.

However, Xuan Wu is distracted - he must save Emma from the Demon King and give her the elixir of Immortality, but at what cost?

Having been very busy over the last few months, my reading time has been retasked to other, more pressing priorities. But I managed to sneak in a few minutes here and there to work my way through this book, the seventh (or 8th, if you count the prequel book, "Small Shen") in a series I have come to absolutely love!

Having recently read the first three stories, brought together as a compendium under the banner title Dark Heavens, but not yet read the three titles in between - the Journey to Wudang trilogy - I admit there's a bit of a gap in my knowledge of this series that makes it tough to know what's a new revelation in this title, and what is just follow-on from previous plot threads... but either way I found this story so easy to get involved in.

I had already formed an empathic bond with many of the characters, so learning their fates at this point in the plot was something that drew me right in. A few extra revelations that may only have been such to me because of missing some titles, made for thrilling reading and though it was clear I had missed significan't plot elements by skipping the second trilogy, I still found myself able to pick up the story and roll with it - the true sign of a great plot well executed.

Overall, despite the loss of some treasured characters, and the introduction of others, this is a storyline I was at once fully comfortable with, but eager to dive into again. I really am motivated now to seek out copies of the Journey to Wudang trilogy and get fully caught up before the second title in this trilogy is released next year. Full of great cultural information as well as a fantasy fantasy plot, it's a great read for a wide range of fans.

The first installment of a stunning trilogy about power, decay and the hard path to redemption.

In a remote coastal outpost of the Asan Empire, Hwenfayre is an outsider, taking pleasure only in her beautiful driftwood harp. The harp has extraordinary powers, and when Hwenfayre tries to use it she finds herself in mortal danger.

In the decadent Asan capital, Shanek, the third most important man in the Empire, ... more...