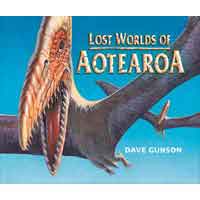 Disclosure StatementFULL DISCLOSURE: A number of units of this product have, at some time, been supplied to KIWIreviews by Penguin Random House or their agents for the purposes of unbiased, independent reviews. No fee was accepted by KIWIreviews or the reviewers themselves - these are genuine, unpaid consumer reviews.
Available:

This stunning illustrated book describes the animals and plants that once thrived in New Zealand, but have now become lost to us for a variety of reasons.

Covering the last 120 million years, this book is divided into three sections: the reign of the dinosaurs: after the dinosaurs; and the ice ages and beyond. Within these sections, there are several vivid double page spreads illustrating related animals and plants in an active setting - either the coast, plains, swamp, bush, forest or the sea.

The Lost Worlds of Aotearoa stars the dinosuars that would have lived in NZ - including megalosaurs, sauropods, ankylosaurs and pterosaurs among others; the New Zealand crocodile, the giant gecko, the giant shark, several species of moa, the Haast's eagle, as well as some more recent extinct species such as the huia, the Northland skink and the bush wren.

Simply and directly written, this book opens up a window into New Zealand's far-distant past, tracking its evolution from being part of Gondwanaland to its present state.

This picture book gives detailed information and fantastic double page illustrations of New Zealand's dinosaurs of coast, land, and sea, as well as details in the same format of the animals shortly after the dinosaur's reign, and later, after the ice ages, including more recently extinct New Zealand moas and huia, and the giant Haast's eagle.

Each double page illustration showing animals together in their environment is followed by a fainter version of the same illustration, with interesting descriptions of each animal.

Each section, the reign of the dinosaurs, after the dinosaurs, and the ice ages and beyond, includes a two-page article on the species of that time, as well as details and illustrations on how New Zealand broke away from the super-continent Gondwanaland and changed over time.

Tom Hassler is no ordinary boy. He can fly, for a start, and talk to sea creatures. But can he stop the slaughter of innocent whales and their calves in the Great Southern Ocean? Is he brave enough to stand in front of their harpoons, if that's what it takes?

In the Antarctic, a group of dastardly whale hunters are on the prowl. Tom's amazing grandmother reviews the terrible scenes from the monitoring lab at Castle Hassler. ... more...