I, Robot - To Protect review

ProdID: 3224 - War of the Worldviews
Written by Deepak Chopra and Leonard Mlodinow 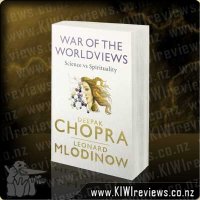 War of the Worldviews product reviews

These, and other profound subjects, are debated by Dr Deepak Chopra and Professor Leonard Mlodinow, best-selling authors and cutting-edge thinkers in the fields of spirituality and science respectively. From the nature of time to the mechanics ofr consciousness, Mlodinow and Chopra lock horns and challenge us to consider revolutionary theories about the cosmos and our place in it. Their discussion enters fascinating new territory, where knowledge and mystery meet head on. And the results are startling: science could prove to be the strongest ally spirituality has ever found.

Having read both authors in the past, when authoring either solo, or in concert with others within their own field of expertise, I found them both to be astounding minds, able to grasp the most subtle nuances of their fields and translate them - either by analogy or metaphor - into language almost anyone could get to grips with. Thus, I was dead keen to get my hands on this book and see their points of view on the same questions, compared side by side. Little did I know that these great minds could stoop so low as to resort to personal put-downs, quibble-level debates, and cheap literary tricks to try and score points off each other in the same manner as I see local kids do at the playground.

This book, though containing some decidely insightful and provocative thoughts and ideas, also contains some of the sadest examples of great men behaving like schoolkids in order to enhance their own ideas, not by extoling the merits and strengths of the ideas, but by highlighting the flaws and weaknesses of the contrary viewpoint. Who was behaving the worst is impossible to point out, since they took turns being the first to answer the questions. Ideally, what I would have preferred from this book would have been for both participants to have been presented with the questions, and their answers presented cleanly without first having the opportunity to see each other's answers, rather than a 'debate on paper' which clearly led to some negative mindspaces being dwelt in for too long.

Overall, though it had great potential, I think the reality of this book was handled quite badly, and the results were little more than an alternating case of "I say this", "And I say you're wrong and my idea makes more sense." As a reader, and someone with more than a passing knowledge of both authors... I say "You're both great men, and should be ashamed to have this published." I have, in some small way, both lost respect for both of these men... yet find myself strangely reassured that if such great minds can act so childish, there is some hope for us all to reach the stars we dream of one day touching. Thank you gentlemen, you certainly did change my worldview... just not in the manner expected.

Sometimes in war the toughest enemies are starvation and disease.

Taken from their home, forced to leave their country, put to work in labour camps, frozen and starved, Adam doubts that he and his family will ever make it out alive.

Even if they were to get away, they might freeze to death, or starve, or the bears might get them. For the Polish refugees, the whole of the USSR becomes a prison from which there is no escape.