ProdID: 6235 - Tombquest 1: Book of the Dead
Written by: Michael Northrop 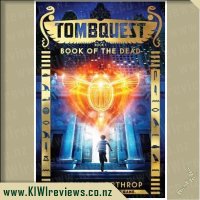 Nothing can save Alex Sennefer's life. That is what all the doctors say, but his mother knows it is not true. She knows that the Lost Spells of the Egyptian Book of the Dead can crack open a door to the afterlife and pull her son back from the brink. But when she uses the spells, five evil ancients, the Death Walkers, are also brought back to life.

An ancient evil has been unleashed. Mummies are awakening. New York is overrun with scorpions. And worst of all for Alex, his mum and the Lost Spells have both disappeared. He and his best friend Ren will do anything to find his mum and save the world even if that means going head to head with a Death Walker who has been plotting his revenge for 3000 years.

I've always been interested and curious about ancient mythologies from around the worl and when a book can give me a good story centered around the myths of an ancient cultures and their beliefs, I'm always keen t give it a good try and thus I easily put my hand up to request this book, the first in a series, to read. Tombquest centers around Alex, a rather unwell young boy who is a medical mystery. The book starts off slow, giving you some teases as to what is going to happen, but also a good build up as to just why his mother was so desparate that she risked unleashing nasties into the world. This is a bit of a detective story mixed with magic and action, so a good variety in this book.

I liked most of the characters in this book, Ren is a suitibly strong female character who battles her fears well and by the end of the book is just as main a character as Alex is. I like how things slowly come alive and that whilst the magic plays a big part of the story but doesn't override everything else, Alex is battling the demons that come with his mothers choice and I think this is really well done. There were a couple of moments that were meant to be scary and tense for our main characters, and I must admit that one part did freak me out a bit. I really liked the cover design for this bok, it fits the book well and certainly caught my eye.

This was a fun book and I'm interested enough to see where Alex and Ren are going to go from here.

For me, the best thing about a book series is getting to read it right from the get-go, so I was very excited to get the chance to read the first book of this new series. The book itself was very intriguing, with a plot-line which sometimes didn't make sense, but that is not uncommon for a first book, as it's main purpose is to set up the overall mystery for the whole series, and usually isn't self-conclusive. The book does base it's plot on the supposed dangers of awakening ancient powers, even if it was for a noble cause, such as Alex Sennefer's mother using the "Lost Spells" to resurrect her son. What happened afterwards was what made the book interesting for me. I have long since had a fascination with ancient Egypt, in fact it was one of the first subjects that got me into history, so as you may expect from this, the fact that the book revolves around the supernatural side of that ancient civilization.

In this book, I wasn't entirely sure just what this "Death Walker" was, was the human form it took on a disguise, or was it possession, or what? Also, despite being the main threat in this book, this Death Walker wasn't brought in that much, but instead most of the story was focused on one of the newly resurrected mummies, a rather confusing way of doing things, but I'm sure it has it's reasons. I am interested in seeing how this series goes, it is off to a bit of an unusual start, but the series usually gets better over time, and fingers crossed this one will. It was a little hard to visualize the details in this book, but I must say that it was still very fun to read. The book also brought about some very interesting thoughts about what happens when we are close to death, as well as just how magic might work in this world, and how we may be able to wield it.

A lot of this story introduced a lot of "magic", and Alex is apparently only just getting started in terms of using it, but the book has introduced another character, who I will not name, who serves as sort of an Obi-Wan-like mentor (only he doesn't die in the first book!). So this is going to make things fun to read about. I have not yet tried the online game, so I can't provide any opinion on that aspect, but I will be sure to do so when the next book comes around. I think the book was rather good to read, it comes at a very good price, but in terms of losing track of time, I was only somewhat affected. Overall, I am very much looking forward to reading the next one.

Every child loves a snow day - no school and snowball fights galore! But Sam has to wait for Granddad, even though all the other kids have already gone to the park... and all the dogs... and all the zoo animals! Only when the two finally arrive does Granddad see why Sam was in such a hurry - and they have the best time playing with everyone in the snow.