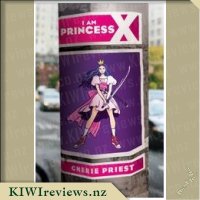 I Am Princess X product reviews

Once upon a time, two best friends created a princess together. Libby drew the pictures, May wrote the tales, and their heroine, Princess X, slayed all the dragons and scaled all the mountains their imaginations could conjure.

Once upon a few years later, Libby was in the car with her mom, driving across the Ballard Bridge on a rainy night. When the car went over the side, Libby passed away, and Princess X died with her.

Once upon a now: May is sixteen and lonely, wandering the streets of Seattle, when she sees a sticker slapped in a corner window.

It's been a very long time since I have read a whole book in one day. It was not my intention, I had originally planned to just read the first chapter and before I knew it, most of the day had gone and I was just about finished. Reluctantly I had to put it down as mummy duties demanded I get the girls ready for there performance at the Bowls Festival of the Lights last night but as soon as I had got home, after the girls where back in bed I read the final three chapters.

I loved the writing style of this book, it was so engaging and fast paced and left you wanting more. The chapters at times, where quite long but most contained part of a comic book so it was always something to look forward to. Also, at the start of the book was a chapter reference, which was rather neat as I could flip back to that page and find out how long the next chapter lasted instead of flicking through the pages.

Its a mystery murder, kidnapping book and at first you are wandering is Libby still alive. But as the clues became more focused on May and there relationship you summise that she must be. Then you are wandering who the Needle Man is and how much of the comic is actually true. Its fantastic. I really enjoyed this book and am interested in reading more of the authors other books. This book could easily appeal to everyone and is a very easy read. Its not complicated at all and extremely enjoyable. My six year old has taken the book to her room and is now wanting to find out why I was so involved with it..... to be honest maybe a little advanced for her but in a couple of years she would be all over it.

I took this away with me recently as I was going out of town alone. This is a bit of a luxury for me, but I knew I'd be bored out of my tree before long and I was too! I started this book and got half-way through it easily on the first evening, and I managed to finish it off in the second evening no problem. Despite usually needing to have the TV on in the background, I never felt like I needed that with this book.

I found that there were lots of natural places to pause the book too. As the story unfolds, there are quests that the characters go on laced into the chapters. So once a quest is completed, you feel like you can just close the book. At the same time, there was something always drawing me back to the book. It wasn't an urgent need to know what happens next, but a gentle desire to see how it all ends up. This meant I was able to easily go to sleep the first night. It also meant I could have stopped reading the book the next night before finishing the tale too.

That said, when reading the book I was totally absorbed. I lost hour after hour last night because I dove into the story and then come up for a break, looked at the clock and couldn't believe the time! This book had neat characters, and quite a unique storyline. It was full of danger and internet secrets. There are car chases and heroics. Best of all, it is broken up with comic book pages every now and then, which help to round the story out and give us clues and hints to what is happening. There's a bit about the darker corners of the internet which was interesting. I know a little bit, but not very much about those things.

I also liked that this book wasn't very predictable. A couple of times I was really sweating over something a character was going to do and I thought I knew what would happen. But the thing never happened. This was lucky because the ending would have been quite different. Although this is for pre-teen to teenage readers, I think I could easily read this to my 8 year old daughter and she'd be fine with it. There is some murder and stuff in the story, but it is glossed mostly. It would not be much different to watching The Flash or something with your kids. It's kinda like family entertainment in a way.