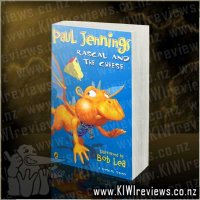 Rascal and the Cheese product reviews

Rascal has a new friend, and it's a mouse that's just as cheeky as he is. Rascal stars in a mysterious whodunit with a secret twist!

Snail and Turtle are Friends
Rating: 8.8

Great sized book for young readers with fantastic pictures. Very believable story that is easy for preschooler's to 6 or 7 year olds to follow.

Easy to recognize words for this age group that are learnt at the beginning of school life.

I also like the fact that there is a set of these books - that now thanks to KIWIreviews my 5.5year old granddaughter wants.

I loved Paul Jennings growing up and never dreamt my kids would read his stories at such a young age. This book is well written for the beginner readers and illustrated to the stage the story comes to life in a whole new light. My 5 year old was given it at school and although every now and again needs help with reading it, does well to read most of the book most of the time to herself and her sister.

It has been discussed that it is a good book because the pictures arent too hard to understand and are well detailed (like seeing through rascals wings at the things behind him). I question what age group this book is targeted at because children young and old can enjoy this book over and over again.