« Minions: Book of the Film review 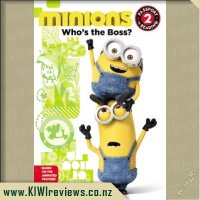 Minions Ready to Read Level 2: Who's The Boss? product reviews

But one Minion named Kevin has a plan, and he-alongside teenage rebel Stuart and lovable little Bob-ventures out into the world to find a new evil boss for his brethren to follow.

The trio embarks upon a thrilling journey that ultimately leads them to their next potential master, Scarlet Overkill (Academy Award ® winner Sandra Bullock), the world's first-ever female super-villain. They travel from frigid Antarctica to 1960s New York City, ending in mod London, where they must face their biggest challenge to date: saving all of Minionkind...from annihilation.

Featuring a soundtrack of hit music from the '60s that still permeates our culture today, Minions is produced by Illumination's Chris Meledandri and Janet Healy, and is directed by Pierre Coffin and Kyle Balda. Brian Lynch has written the screenplay for the 3D-CG comedy adventure, and Chris Renaud serves as executive producer of the film.

A reader based on the new feature film!

Since the first Despicable Me movie minions have been a huge hit with everyone in out family and it's fair to say we are all a little excited about the movie! When the chance to review the minion book came up I thought it would be perfect to read with my niece.

I took the book around to show my niece and she begged me to read it to her straight away. Opening the book we first just looked through the it and I was struck by the bright pictures, I haven't seen the movie yet but I guess they are scenes straight from the movie. We then went back and read through it, on the first page their was a list of four things to look for throughout the story and Miss nearly 5 took that job very seriously studying each page,

The story was very enjoyable which is good because we ended up reading the story several times. I did find there were a number of words throughout the book which was a little hard for children to read alone. Miss nearly 5 while she is just learning to read managed to pick up the story very quickly and could recall most of the story. It was so cute to watch as she sat down with her baby brother and retold him the story. I can imagine it won't be long and she will be able to read most of it on her own as it has her really interested.

I was lucky enough to get tickets to go and see Minions at the movies with More FM and took the whole family to go. Given that my son is learning to read I knew this would be a perfect book for him to read and since it is specifically aimed at children learning to read it looked to be a good match. My son was drawn to this right away, he knows the minions (though until now he called them "Despicable Me's") and when he saw it was aimed at his reading level he was right into it.

Having just seen the movie of Minions I can tell you that this is pretty accurate for what happened in the film and some of it is word for word for what the narrator says. There were a few words that were perhaps harder than one would expect for a child at that reading level, such as despicable, Dracula, Pharaoh and pyramids but my son gave them a good try and most of those words he was able to deduce give the pictures that came with them. My daughters loved looking through this for the pictures whilst my son was so proud that he was able to read it mostly on his own and he finished the whole book.

This is a great book as it doesn't give away any major plot points and for me it was the most enjoyable part of the film so I'm happy to have it read to me again and again. This has been a hit for my eldest and I'm glad we get to hold on to it so that my younger kids can read it when they get up to that level too.

Join Bertie as he crosses paths with a cheeky rodent, takes part in a chaotic cross-country run and tries to get his dog Whiffer to eat healthily - with disastrous results!