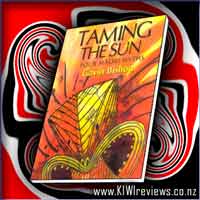 Disclosure StatementFULL DISCLOSURE: A number of units of this product have, at some time, been supplied to KIWIreviews by the company for the purposes of unbiased, independent reviews. No fee was accepted by KIWIreviews or the reviewers themselves - these are genuine, unpaid consumer reviews.
Available:
September 2004

TAMING THE SUN is written and illustrated by well-known children's author and artist Gavin Bishop. Here Gavin retells four Maori legends in a very accessible style, colloquial and yet poetic. The book contains two well-known legends Maui And The Sun, Maui And The Big Fish - and two less well-known legends: Rona And The Moon and Kahu And The Taniwha. Gavin has employed a similar style for this book as he did for WEAVING EARTH AND SKY, using a strong graphic technique with stunning colours which helps the reader visualise the world of gods and mythic adventure.

TAMING THE SUN is aimed at a younger age group than WEAVING EARTH AND SKY. The retelling of the stories and the illustrations of these myths and legends are in a much simpler style for a younger audience.

I thought I had a handle on Maori culture, after all they're on the news often enough. But after a recent visit to a local Marae, and spending a day as their guest, with a group of about 140 others, my eyes were opened to the realisation that the media only cover the extreme ends of the Maori cultural spectrum. We only see the poor and unemployed, contrasted with the agressive activists. We are not shown the true nature of Maori culture, the history, the stories and lore, the Kawa of the nearby Iwi, and the ethical lifestyle many culturally-active Maori enjoy as part of their heritage.

So, in the spirit of exploring something old, yet new to me, I picked up this book I had on the shelves waiting for a new home, and had a read of it. Yes, it is written to be understood by the younger generation, but the stories give an insight into the myths and legends of the Maori culture to anyone who reads them. If you can suspend your disbelief, and ignore the occasional contradiction caused, no doubt, by centuries of retelling, there is a wonderfully colourful world in there worth exploring.

Being a hardcover, it is a little pricey at first glance, but when you consider the added durability hardcover books often have over paperback, the cost isn't really too far off the reasonable track at all. And the illustrations are alive with vibrant colours and traditional styling.

Overall, I was highly impressed. As a child I heard all four of these legends, and I was gratified to see that even with the removal of some of the grosser bits (such as Maui's bait when he fished up Te Ika a Maui, The North Island) the stories still retain all their rich texture and wonderment. If you are of the multicultural school of thought, you will find this to be a wonderful addition to your child's bedtime story collection.