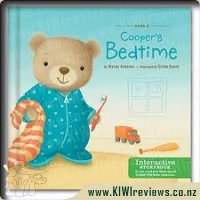 With their imaginations running wild, it's tough for little ones to fall asleep at the end of the day. Cooper knows just how they feel. Read all about the cuddly bear's bedtime routine in this Interactive Story Buddy Book that unlocks new things for Cooper to say.

About the story: It's Cooper's bedtime, but he's not tired. His imagination runs wild as he thinks about all the fun he could be missing, from nice robots that help with homework to a traveling night circus. Will Cooper ever get tired enough to give his imagination a rest?
Hardcover; 32 pages.

What Do You Need Little Rhino?
Rating: 9.6

We bought this book to go with my son's interactive story buddy Cooper. At only $10 it is a good price to allow you to be able to add to the Cooper Collection, I bought this from Briscoes at Christmas and I actually ended it up getting it for only $5 so even better when you can get it on special. This one follows along the same lines as Coopers Big Bear Hug with a few key words in the story that trigger Cooper to speak.

It is a nice little story about Cooper not being tired and the things he could do instead of sleeping. It is nice to show just what a child's imagination is capable of. I think it makes a good bedtime story for the little ones who always have reasons why they shouldn't be going to bed. It also shows nicely the bedtime routine of getting in your pajamas and brushing your teeth which is nice.